The 'Jersey Shore' star takes to Instagram Stories to diss her estranged husband for having a night out with his friends when he is supposed to look after their children.

AceShowbiz - Just when people think Jenni "JWoww" Farley and Roger Mathews have finally put their differences aside to commit to co-parenting their children, things have once again gone south. The "Jersey Shore" star put her estranged husband on blast after she found out that the latter left their kids to someone else so that he could spend the night having fun with his friends.

In a since-deleted Instagram Stories post, JWoww said, "When you find out on Wednesday your kids will Be with someone other than their father over the weekend because he wants to rage during HIS time because it's been planned 'for months' yeahhh ok," along with rolling eyes emojis. Taking shots at the fact that Roger often posted pictures of him with their kids, she added, "Loving all your 'dad posts.' Please keep your over posting... really shows how 'involved you are.' "

JWoww was referring to one of Roger's Instagram posts, which saw him in a car with a handful of friends. In the caption of the post, he said that their outing had been planned "for months," assuring his followers that their children were "enjoying a sleepover with my best friends kids."

Roger has yet to respond to the criticism, but some of his fans have already stood up for him. "So #jwoww goes out & flaunts her 'new' relationship all weekend to try and get Roger jealous..but then gets mad when he goes out on one night with his friends? #GirlBye I'm sure when your kids are back with you you'll be using them for a sponsored post again. #TrueInvolvement," one said, expressing his/her hate towards the star's "victim attitude when clearly she's an instigator as well." 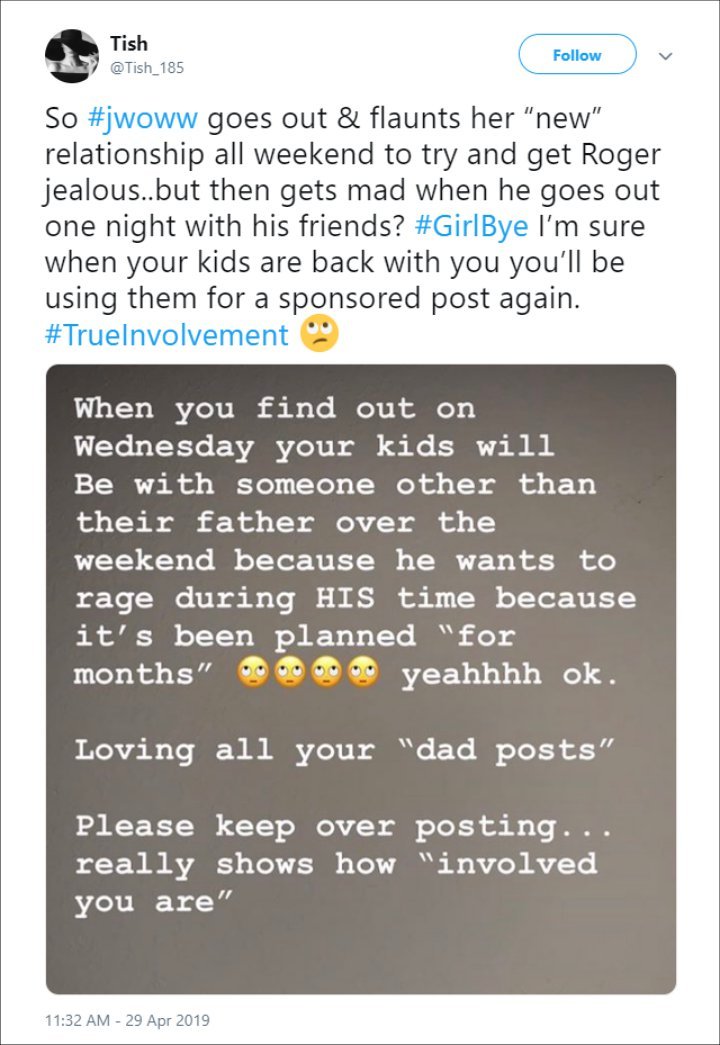 One fan defended Roger Mathews after he was dissed by JWoww over co-parenting skill.

One Instagram user then pointed out the fact that JWoww found out about this prior to her date with her new boyfriend, but still decided to go on the trip instead of staying at home. "She sure wasn't worried all weekend while flooding IG with her posts. But she decides to throw him under the bus as shes on her way home," the user wrote. "Smh. I'm starting to see who tge narrsasist (sic) is..."

"Ok she literally can't even talk she is being so petty everyone deserves a night out meanwhile she is on vacation at Disney with a 24 year old like she is too petty and hard to deal with," another echoed the sentiment. One other, meanwhile, told Roger not to respond to JWoww because "you have nothing to prove to anyone." Someone else said, "Jenni goes on vacation without her kids and her new 'boyfriend' and has the nerve to slam roger for going on her Instagram story."

'The Voice' Recap: Top 24 Hit the Stage Ahead of Big Elimination