Even though the blonde mom has hit back at her former co-star after he fat-shames her, that doesn't stop him from criticizing Kailyn's appearance by comparing her body with his wife's.

AceShowbiz - David Eason is clearly not a fan of Kailyn Lowry and he's more than willing to let the world know about it. The "Teen Mom 2" star, who is in a longtime feud with his wife Jenelle Evans, recently stunned people with her recent bikini picture, but David didn't think it was stunning at all. Instead, he felt that people like Kailyn can't never be stunning.

Sharing an article of Kailyn's bikini picture on Instagram Stories, the former reality TV star said, "I'm sorry but there is nothing stunning about being overweight. How about promoting a healthy lifestyle instead of making it seem okay to be." His text was cut off from the story.

Kailyn soon took notice of his criticism, and she gave a classy response to it. "I can change my body. He can't change who he is," the blonde star wrote on Twitter, adding a peace sign emoji and a dancing woman emoji. 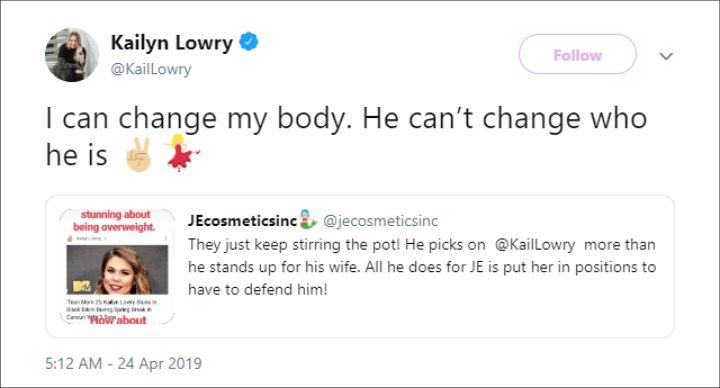 But that apparently didn't stop David from fat-shaming Kailyn. He later uploaded on his Instagram account a picture of Jenelle rocking a blue bikini. As she was facing away from the camera, her butt was full on display. "Now this is what you would call 'stunning in a bikini'! My wife is the absolute most beautiful woman I have ever seen in my life," he wrote in the caption.

Kailyn hasn't responded to his second criticism, though some of her fans have come to her defense. "I'd take kails body any day over this s**t lmaoooo. Can't even compare," one said as another offered a rather lengthy response, "Stunning comes in all shapes & sizes. Unlike your other half Kailyn is beautiful inside & out. She's a fab mam & has lots going for her. You & Janelle = poison."

Meanwhile, Jenelle has yet to say anything about this.

People Call Meek Mill and P. Diddy 'Gay' Because of This Pic