Having been hit with backlash for describing Irish women as ugly in an online rant, the '212' rapper once again attacks the Irish by mocking their Great Famine among others.

AceShowbiz - Azealia Banks has again verbally attacked the people of Ireland, just hours after apologising for calling them "f**king ugly".

The U.S. rapper hit headlines earlier this week (begin 21) when she had a row with a stewardess on an Aer Lingus aeroplane bound for Dublin, after which she stormed off the aircraft and took to Instagram to rant about the Irish, sharing a series of videos in which she described Irish women as "ugly" and claimed she was treated like a "wild animal" by staff at the airline.

Azealia then backtracked as she took to the stage at The Academy Dublin on Tuesday night, dedicating the show to all the "beautiful Irish women" in the crowd.

However, just one day later, Azealia once again attacked the Irish in several Instagram comments, with the most shocking remark coming as she mocked Ireland's Great Famine which ran from 1845 to 1849 and claimed the lives of one million Irish people through starvation and disease.

Replying to an offensive comment from one of her Irish followers, Azealia wrote: "Don't you have a famine to go die in?" 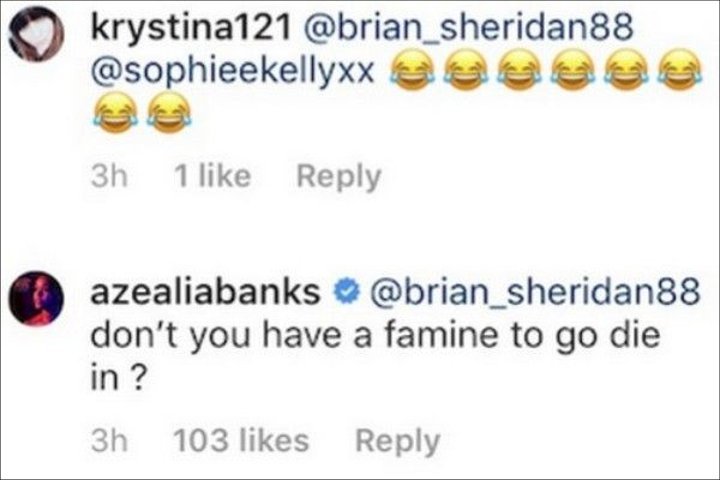 Azealia Banks replied to an offensive comment from one of her Irish followers.

Hitting back at another rude remark, the rapper continued: "Because most of you can't talk or write lol (laugh out loud). You lot are a bunch of prideful inbred leprechauns who have ZERO global influence and ZERO white privilege. The rest of the world's white folk don't want to associate with you lot at all and it's because you are barbarians." 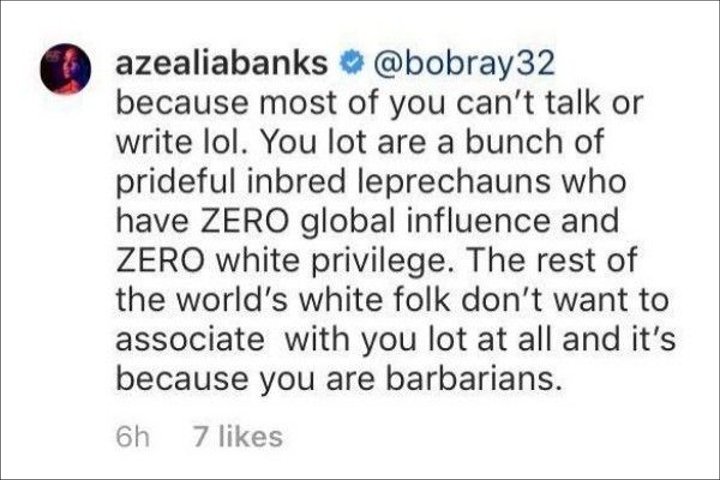 "I'm happiest knowing the Irish are quarantined on an isle so they can continue to inbreed and keep their defective genes away from humanity." 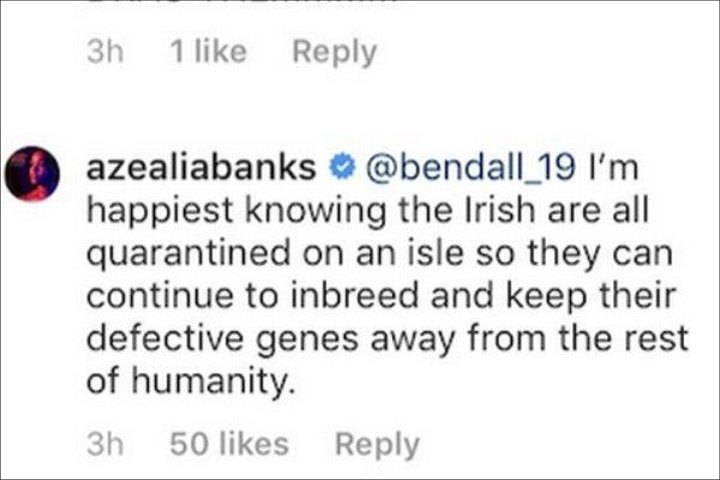 Azealia Banks wasn't done hitting back at the follower.

She concluded her rant by replying to one person who agreed that they have "yet to see a pretty Irish woman", writing: "LOL".

Complications Determined as Comedian Kevin Barnett's Cause of Death