The massive property, which is currently under construction in Australia, is upsetting local people for its bunker-like aesthetic.

AceShowbiz - Chris Hemsworth's joy is his neighbors' sorrow. The actor and his wife Elsa Pataky have been building their dream house in Australia since late last year, but it's reportedly upsetting other people who live around the property.

The mega-mansion is set in the hills above Seven Mile Beach at Broken Head in Byron Bay, New South Wales. The couple is said splashing $8 million for the massive building, which reportedly will boast six bedrooms, a huge swimming pool, steam room, gym, a luxury spa and media room.

As the compound has begun to take shape, the residents fear that the massive building will spoil the local charm. The multi-storey complex has a rectangular shape with towering walls, prompting many to liken it to a bunker, shopping mall, prison, hospital and even an airport. 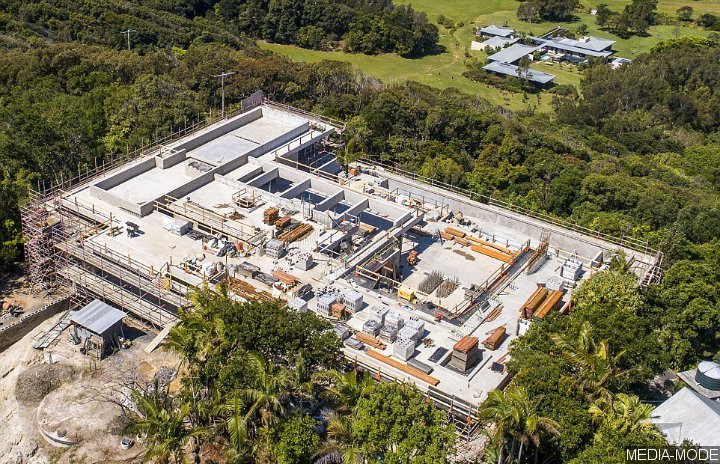 The building is likened to a fortress for its towering walls and rectangular shape.

Darren Birch, who has lived in the area for 38 years, says that the influx of celebrities living in the neighborhood has played a part in killing the local charm. He tells the Herald Sun, "It used to be very quiet, but the overflow from (Byron Bay) is horrendous: you can't get a park, you've gone from surfing with three people to surfing with 53 people." He laments, "It seems excessive but there's not much we can do about it - nothing surprises me in this town these days."

Some Internet users have also chimed in, with one saying, "It looks like an office building right in the middle of that beautiful place." Another commented, "It looks like a factory." Someone else slammed the house's structure, "Obscene and totally out of character for the area."

Chris and Elsa purchased the property for $7 million in 2014. It used to be a Balinese-style, eight-bedroom and 11-bathroom resort home spread over 4.2 hectares. While it was much smaller in size, the old compound was cozy enough with its beautiful aesthetic.

'This Is Us' Season 3 Premiere Features More Twists About 'Her'