The 'Fault in Our Stars' actor tweets his support for the Korean boyband, especially for its member V.

AceShowbiz - Ansel Elgort is a big fan of BTS (a.k.a. Bangtan Boys). And in case you still have no idea how much he adores the popular South Korean group, the 24-year-old actor did this to show his support for the "Fake Love" hitmaker, especially for its member V.

Ansel, who is also a DJ under the name Ansolo, recently changed his Twitter profile picture to a photo of the band's member, V. He additionally posted, "KEEP GROWING!!!" to acknowledge the group's growing popularity. 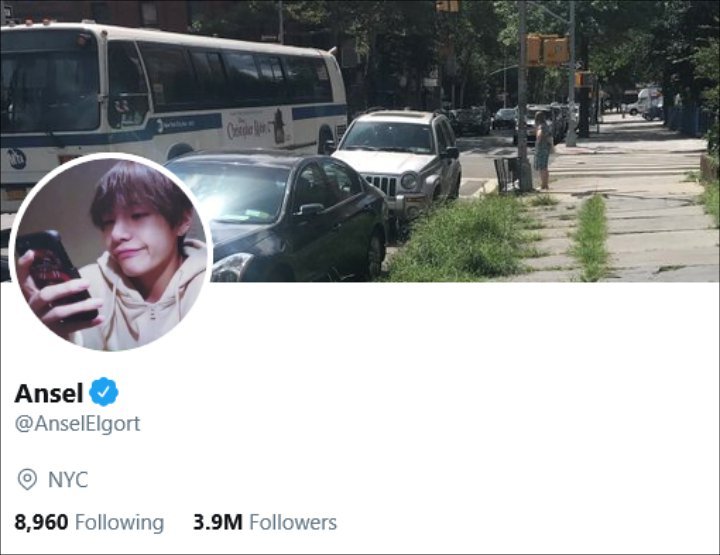 ARMYs are loving the way Ansel showed his support for BTS and V in particular. "We purple you! Thanks Ansel for showing so much love to our angel Tae," one commented on the "Baby Driver" star's tweet.

Ansel ran into BTS when they attended the 2017 Billboard Music Awards in May last year. They later reunited in South Korea when the Caleb Prior of the "Divergent" movie series promoted his movie "Baby Driver" in the country in August of the same year.

Much ❤️ they are really the nicest dudes, @BTS_twt thanks for coming and supporting #BabyDriver I can't wait to hear your album guys pic.twitter.com/FDozFAQzta

Later in November, Ansel was fanboying over BTS when the group performed at the 2017 American Music Awards. He was spotted swaying his body to the boys' song while documenting the performance with his phone camera.

In January this year, he was caught commenting on a photo of V posing with a big plushie of the 2018 Pyeongyang Winter Olympics mascot. "Omg," he simply gushed over the cute picture.

BTS recently held their concerts in Los Angeles, Oakland and Fort Worth from September 5 until September 16. It's unknown if Ansel managed to catch the group's performance at one of the concerts.

Meanwhile, Matthew McConaughey was surprisingly spotted as one of audience members at BTS' concert in Fort Worth, Texas on Sunday. The "Dallas Buyers Club" star went casual in a black T-shirt, jeans and a black cap as he recorded the atmosphere at the arena with his phone camera.

Fans reacted to the sighting in disbelief. "Today I saw an American actor, Matthew McConaughey taking fancam at #LOVE_YOURSELF tour in #FortWorth @BTS_twt Stans are evolving!" one posted on Twitter along with a video of the Oscar-winning actor at the concert.

Ansel Elgort Denies Sexual Assault Allegations, Says the Girl Was Upset Due to Their Messy Split