The 21-year-old model poses topless as she wears only a nude thong while cuddling her new puppy in a clothing store's changing room.

AceShowbiz - %cBella Hadid% debuts her new puppy on social media with a racy photo of herself posing with the adorable pooch. The 21-year-old model took her puppy shopping for the first time on Wednesday, January 31 in New York, where she posed with her new pet for a cute yet sultry Instagram photo.

Posted on the photo-sharing platform by her stylist Mimi Cuttrell, the snap featured Bella showing off a bright smile while posing almost entirely nude as she wore only a pair of nude thong panties. She cuddled her new puppy when posing in front of a mirror inside what appeared to be a clothing store's changing room.

"puppy's first day shopping," so Mimi wrote in the caption. 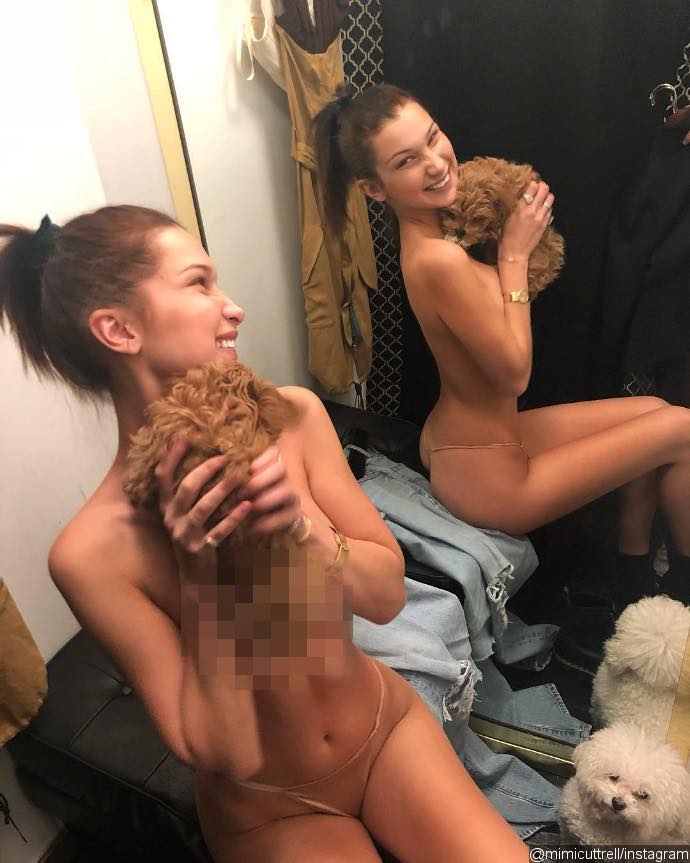 Bella also introduced the dog to her nearly 17 million followers on the social media. In a couple of photos she posted on her own account, the Victoria's Secret model could be seen holding up the tiny curly-haired pooch as she posed inside the store, this time with her clothes on.

Bella has another puppy, Hendrix, that was gifted for her 19th birthday.

The younger Hadid sister posing nearly naked with her new dog comes just days after she posed fully nude with %cGigi Hadid% for a sizzling photoshoot with British Vogue. Gracing the cover of the Spring Fashion issue of the mag, the sisters put their lean figure on full display in one of the pictures taken from the photo session.

Bella and Gigi were seen gazing into the camera while carefully placing their limbs to cover their private parts. Sporting her blonde hair in loose wet waves, Gigi gently rested her hand on Bella's chest while giving a glimpse of her sideboob.

For the actual cover of the mag, both sisters opted for stylish looks by wearing the same one-shoulder metal mesh Versace gown. Gigi accentuated her green eyes with a light dusting of gold eyeshadow as she threw her head back and smouldered at the camera. Bella, meanwhile, gave a piercing gaze to the camera.