The former 'Real Housewives of Atlanta' star posts the semi-NSFW snap days after blasting tabloids for continuously reporting that she and her husband are getting a divorce.

AceShowbiz - Kroy Biermann sure has a lot of free time after he recently got cut from the Buffalo Bills, but Kim Zolciak clearly has nothing to complain about. The reality TV star recently took a picture of her husband going completely nude and posted it on Snapchat much to their daughter's dismay.

In the semi-NSFW photo, Kroy stripped down to his birthday suit while brushing his teeth in what appeared to be their bathroom. Kim censored her husband's private parts and proudly wrote across the picture, "My baby! Don't you wish beyotches." 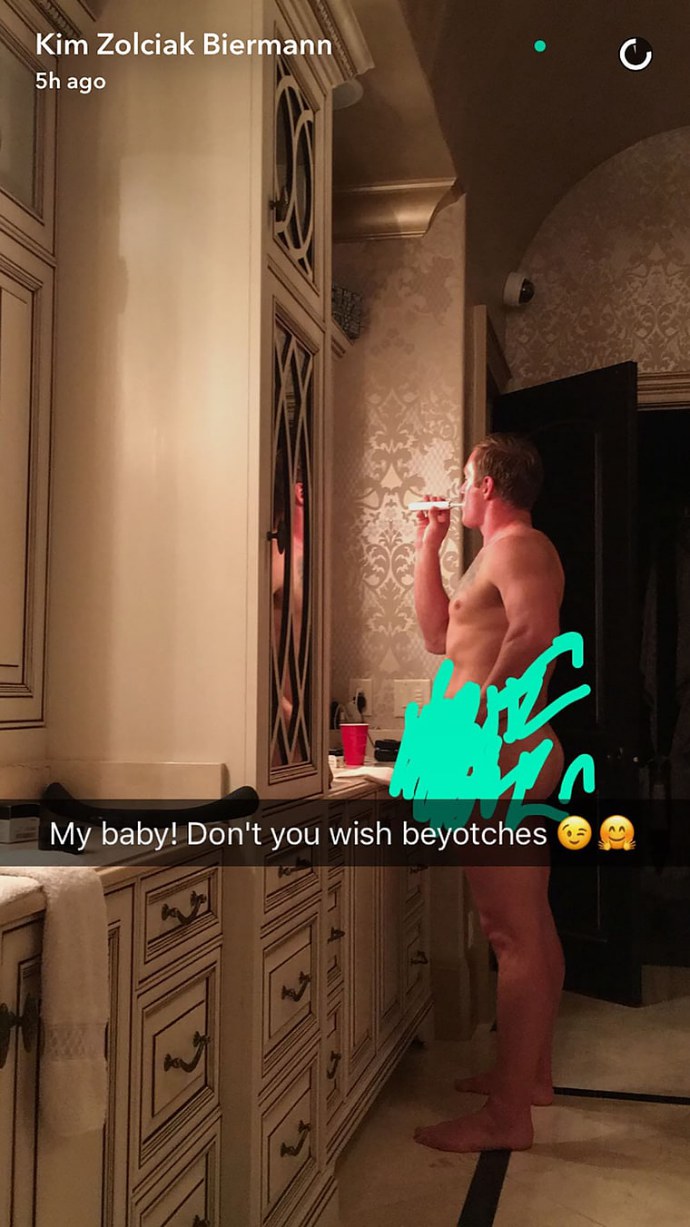 While Kim sounded excited over the photo, her oldest daughter Brielle Biermann wasn't too pleased about it. She sent her mom an angry message which the former "The Real Housewives of Atlanta" star posted online. "Dude what the f**k delete this bulls**t," Brielle wrote.

Kim shared the nude photo of Kroy after shooting down rumors suggesting they're splitting up. A few days ago, she took to Snapchat to praise her husband and reveal that she had no problem with him not being a part of the NFL anymore.

"These f**king idiots that write this s**t in the tabloids all for clicks on your website. You say that Kroy and I are at war because he's home with me so much. News flash, a**holes, he's played for the Falcons for 8 years, so he's always been f**king home," she wrote.

"I really don't appreciate people talking s**t especially s**t that's not true because I have the most incredible husband in the world," she continued. "[I] swear I'm like married to the king. He cleaned the whole house this morning... he cleaned the water fall out front. I swear he's like the most incredible human that's ever walked this planet and I failed to mention that he took Cash to the ER."

'American Horror Story: Roanoke' Eps. 5 Preview: They're Coming for Us