The model nearly showed her private parts as she attended the Target + IMG NYFW Kickoff party in NYC in the nude-colored dress featuring a cutout on her right hip.

AceShowbiz - Emily Ratajkowski decided she didn't need her underwear to celebrate the start of the 2016 New York Fashion Week. The model nearly exposed her private part as she went commando in a revealing outfit at the Target + IMG NYFW Kickoff in NYC on Tuesday night, September 6.

The Sports Illustrated model showed up at the bash in a nude-colored mini dress that featured a huge cutout on her right hip. Letting her wavy hair down, she teamed the jaw-dropping frock with a pair of strappy heels of the same color, black jacket and metallic clutch. 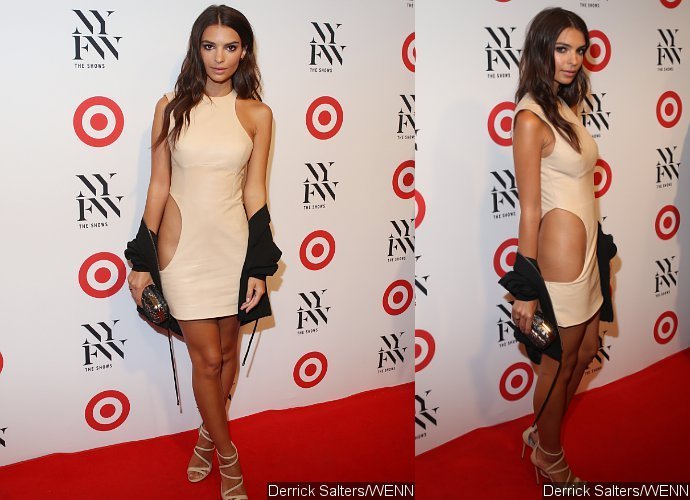 Ratajkowski joined fellow supermodels like Kendall Jenner and Joan Smalls at the Tuesday party. She posted on Instagram a picture of her goofing around while posing with the two Victoria's Secret Angels. Other famous faces in attendance included Christie Brinkley and Chanel Iman.

The 25-year-old brunette, who rose to stardom after appearing topless in the music video of Robin Thicke's "Blurred Lines", is no stranger to baring her body in risque outfits. Because of that, she was heavily criticized and even called "desperate attention whore" after she recently spoke out about politics.

Earlier this week, Glamour published an essay she wrote as her reaction to the backlash. "I realized then that I've been called an attention whore so often that I had almost gotten used to it," she said. "Our society tells women we can't be, say, sexy and confident and opinionated about politics. This would allow us too much power. Instead our society asks us to declare and defend our motivations, which makes us second-guess them, all while men do what they please without question."

"Mick Jagger is 73, and he still sometimes wears his shirt open and gyrates onstage. We understand that this is a part of his performance and artistic brand. Meanwhile, when Madonna, who is 58 and a revolutionary in that same kind of artistic sexuality, wears a sheer dress to the Met Gala, critics call her 'a hot mess' who's 'desperate,' " Ratajkowski explained.

"Our society doesn't question men's motivations for taking their shirt off, or shaving, or talking about politics - nor should it. Wanting attention is genderless. It's human," she continued. "We shouldn't have to apologize for wanting attention either. We don't owe anyone an explanation. It's not our responsibility to change the way we are seen - it's society's responsibility to change the way it sees us."

Patrick Dempsey Says He Should Have Left 'Grey's Anatomy' Sooner