'The Hateful Eight' Brings Out Hollywood Hunks for the L.A. Premiere

AceShowbiz - Channing Tatum and other cast members of "The Hateful Eight" attended the movie's Los Angeles premiere on Monday, December 7. Tatum came alongside his beloved wife Jenna Dewan. The hunky actor opted for a dapper look wearing a navy suit while Dewan was adorable wearing a strappy floor-length dress.

Tatum also posed together with Samuel L. Jackson and Michael Madsen that night. Jackson seemed to be in good spirits as he made some jokes with co-star Madsen on the red carpet. The two laughed while some photographers captured the happy moment.

Jackson looked younger than his age wearing a red blazer over a black shirt and a pair of black jeans. He completed his look with an iconic black leather beret. Meanwhile, Madsen looked dapper wearing a grey suit atop a white shirt. 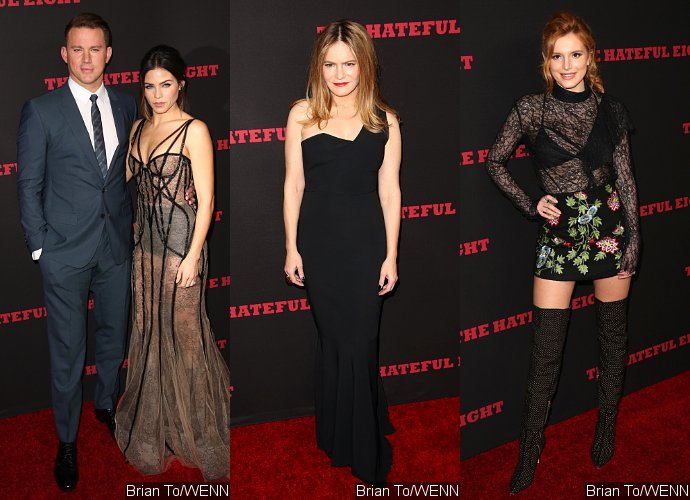 Also stealing the spotlight was Jennifer Jason Leigh, who chose a simple look by wearing an off-shoulder black dress. Meanwhile, Bella Thorne decided to wear a complex-yet-stylish outfit. Thorne looked beautiful in a sheer top which she teamed with a mini skirt and a pair of thigh-high black boots.

Other cast members like Kurt Russell, Tim Roth, Walton Goggins and Bruce Dern also attended the event. Before the screening, they assembled and posed together for photographers.

"The Hateful Eight" centers on The Hangman (Russell) and his fugitive Domergue racing towards the town of Red Rock to bring her to justice. Directed by Quentin Tarantino, the western drama will hit U.S. theaters on Christmas Day.

Jon Stewart Returns to 'Daily Show'. Is He Taking the Show Back From Trevor Noah?