Series co-creator Bill Lawrence says the show is not like 'Friends', where there's time for the characters 'to grow up and get new jobs and have babies.'

AceShowbiz - No one parted ways on "Cougar Town" although the show took its final bow on Tuesday, March 31. In the series finale, [SPOILER ALERT!] Jules (%cCourteney Cox%) thought it would be great to witness her own funeral and see her friends pay tribute to her. She asked Grayson (%cJosh Hopkins%) to make it come true as her birthday gift.

Getting more than what she bargained for, Jules learnt that her closest friends were moving away. Andy (%cIan Gomez%) and Ellie (%cChrista Miller%) were moving away so that Stan could attend a better school, while Travis (%cDan Byrd%) and Laurie (%cBusy Philipps%) were heading to South Carolina to expand his Winebulance business. Jules' father Chick (%cKen Jenkins%) said they had a cousin, Pootie, and he's going to stay with Pootie for a few weeks. Tom (%cBob Clendenin%), meanwhile, couldn't hang out by the window again to spend more time with his girlfriend.

Then each of them began telling Jules how much she meant for them. Even her ex Bobby (%cBrian Van Holt%) told her via a video chat that she's the best thing that ever happened to him and thanked her for making him a better man.

Just as when Jules thought she had the worst birthday ever, it was revealed that Grayson set things up so she could experience what she wanted for her birthday. So no one's leaving. Even better, Travis and Laurie bought Grayson's old house and they're now officially neighbors.

Speaking of the show's ending, series co-creator Bill Lawrence says it's possible to bring the series to a closure without farewell like other series. "It's not like 'Friends'. There's no end to 'Cougar Town' where it's time for people to grow up and get new jobs and have babies," he explains. "These people are all in their 40s, and they're settled, and that's why we're able to tweak the conventions in the finale."

Of the fake goodye that might piss the audience, he says, "We knew we could fake it! We knew, writing it, that if we followed it through and it was actually happening, it would be disingenuous. I felt that right at the point where people are getting pissed off and thinking we were actually doing that, we'd be like, 'Of course no one's going anywhere!' "

Lawrence also reveals that Brian Van Holt's schedule prevented him from appearing physically on the show, so they brought him him back via Skype. He shares, "He was working [on another project], so it was just easier to work him in [via iPad]. The second we put him on an iPad, he could shoot seven days of work in one day, so we were able to make it happen production-wise. He sat in front of the camera and did all of his lines for 33 pages, across the episodes of the season, all at once. It probably took him like an hour and a half! We knew we needed him in the final season, but he had another gig we had to work around." 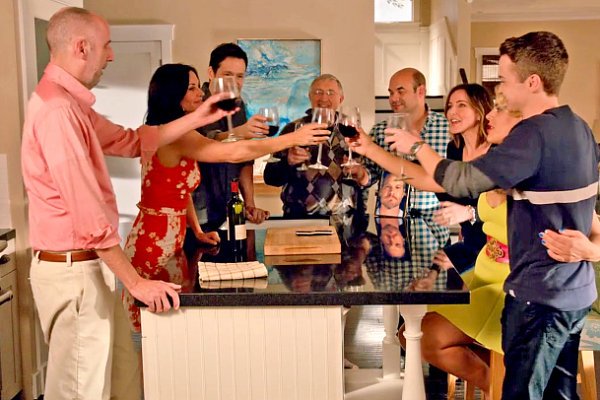