The actress reflects on her relationship with the Coldplay frontman and talks about her new life in L.A. after she moved out of their London home in an accompanying interview with Harper's Bazaar U.K.

AceShowbiz - Gwyneth Paltrow graces the cover of Harper's Bazaar U.K. for its February edition. The actress, wrapping her figure in a black top and showing off her legs in matching shorts in the front page, talks about her relationship with estranged husband Chris Martin, her new life in L.A. and motherhood in an accompanying interview with the magazine. 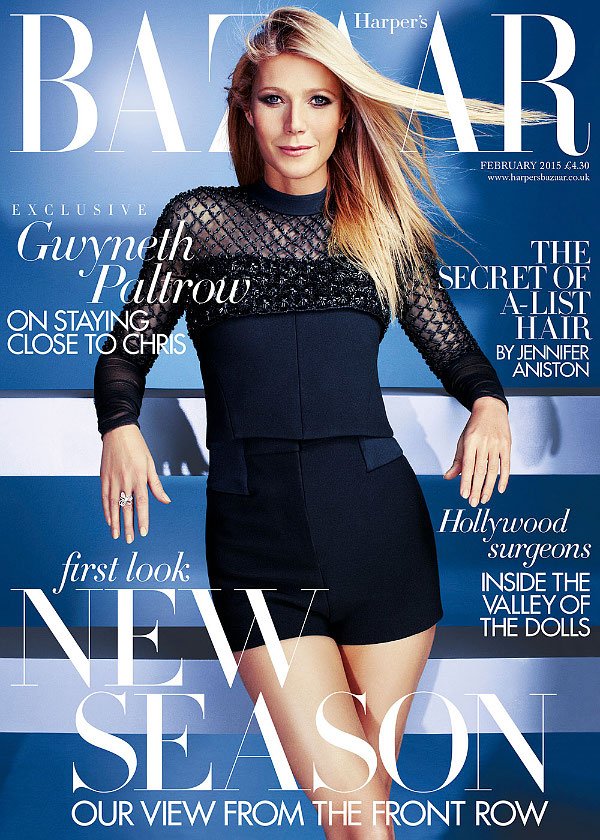 Paltrow recalls how Martin saved her life following the death of her father Bruce Paltrow in 2002. "I feel like I would have died somehow if I hadn't met him at that time. I felt like I was going to die of grief. I remember waking up, on one particular night, where I felt like I was having a heart attack and I couldn't breathe... I lay on the floor of my apartment in London and I thought, 'I'm not going to survive this.' And he just picked me up and he was so loving and patient through all my grieving," she explains.

Their relationship moved "very fast," says Paltrow. She got married to Martin in 2003 when he was only 25, five years younger than her. "Men are very young at that age, and I was relying on him very heavily and I really expected him to keep being this grown man and pillar of strength - which he was and is - but it's also quite an unfair set of criteria to give to someone who's just 25 years old," she continues.

The couple announced their decision to "consciously uncouple" earlier this year. However, they remain close as they co-parent their two children, Apple and Moses. "It's painful, it's difficult, it might be easier to say, 'I never want to see you again,' " she says of the split. "But what good does that do anyone?"

"We've made a lot of mistakes, and we've had good days and bad days, but I have to say, I'm proud of us for working through so much stuff together - and not blaming and shaming," she goes on and then admits that she sometimes wishes they hadn't broken-up, "Of course, there are times when I think it would have been better if we had stayed married, which is always what your children want. But we have been able to solidify this friendship, so that we're really close."

Paltrow also opens up about living in L.A. again after moving out of the London house she used to share with Martin, telling the magazine that there's "a deep comfort" about coming home to California "because it's so familiar."

"The other day I was lying on the grass and the kids were playing and I was looking at the blue sky and the palm-trees - and there was something about the weather and the smell and I was, like, eight years old again," she adds.

Gwyneth Paltrow on Raising Teenage Children: 'Everything I Say Is Wrong'