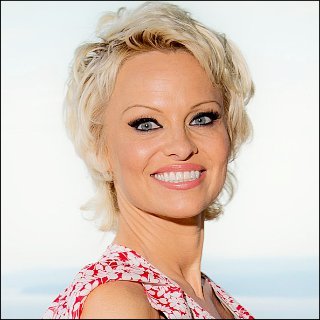 The international television actress, model and producer, Pamela Denise Anderson was born on July 1, 1967 in Ladysmith, British Columbia, Canada. Born right on Canada's Centennial Day, a year long celebration held in 1967 when Canada celebrated the 100th anniversary of the Canadian Confederation, the newborn Anderson was known as the first baby born on Canada's Centennial Day, won fame as the nation's "Centennial Baby."

The prize Anderson won as a new baby born might become her future good-luck charm. 1989 was the beginning of Anderson career when she attended a British Columbia Lions football game wearing "unusual" Labatt's Beer T-shirt caused the crowd cheered her when her image was transmitted on the stadium's wide screen. Then she was brought down to the 50-yard line and introduced to the appreciative crowd which preceded her sign with Labatt's company for a commercial contract as their "Blue Zone" girl. The Blue Zone campaign performed by Anderson was so popular that many other commercials and advertising wanted her.

The many commercials popularized by Anderson gave her a special recognition from Playboy magazine, with which she did her very first cover and kept emerging in its cover for another five times, an achievement more than any other women in the magazine history could do. Such fame and popularity dragged the now-becoming star to leave out her hometown and move to Los Angeles where she spent two seasons (1991-1993) in the top-ten ABC Television hit series "Home Improvement" as Lisa, the Tool Time Girl. From this point, Anderson had done "good enough" work by successfully captured the attention and affection of viewing audiences nationwide that reluctantly gave her the chance to cast as C.J. Parker on the 1989 internationally successful series "Baywatch." Accepted in "Baywatch," Anderson had to think twice before she finally left "Home Improvement" to remain full-time on the series released in 1989.

On February 19, 1995 this actress handed out her chose to marry %cMotley Crue% drummer %cTommy Lee%, whom she felt in love with after knowing him for only 96 hours. From the marriage she has two children, the first is Brandon Thomas and the second one is Dylan Jagger. Facing the ups and downs in her marriage with Lee, Anderson had filed for divorce twice as well as the reconciliation. The first split happened sometimes before December 1996 when both reunited because Anderson wanted to support Lee's fight against alcoholism; and the second divorce happened on February 26, 1998 concerning the assault Lee done to Anderson; and once again, the couple reunited in June 1999 before they finally came to their "eternal" divorce and headed to court over custody of their children. Soon afterwards, in June 2000, Anderson's representative confirmed her dropped the "Lee" from her last name. After the divorce Pamela was reported to close with %cMarcus Schenkenberg%, a model whom she met at the World Music Awards in Monaco in April 2000 and they were also issued to get engaged before on April 11, 2002 the actress engaged to rock musician %cKid Rock%. Exceeding her divorce, Anderson appeared in her own television series, V.I.P., which ran for four seasons began in 1998 until 2000.

In addition to the fame she got from modeling and acting, Anderson had also become the center of spotlight either for her flamboyant personal life or the many controversies she'd made. As an example, she once sued an Internet company for distributing her stolen pornographic home video with Lee, which some media sources reported her to settle the case for $10 million. Moreover, in March 2002, Anderson publicly stated that she had contracted the Hepatitis C virus from Lee, presumably from their sharing tattoo needles she used to make the barb-wire tatoo rings on her left arm. This disease sent her to an undergoing outpatient treatment at the University of California, Los Angeles Medical Center. Nevertheless, Lee had hardly denied of having the disease and claimed the report was merely part of a ploy to take custody of their children.

In the same year she got the disease, Anderson began writing a regular column for Jane magazine besides becoming the celebrity spokesperson for the American Liver Foundation and served as the Grand Marshall of the SOS motorcycle ride fundraiser in October 2002. By the fall of 2003 Anderson performed in cartoon action series from %cStan Lee%'s "Stripperella" launched by the new network Spike. Back then to her love life, Pammy and Rock who both had undergone an on-off relationship at last decided to tie the knot. The former Playboy model and Rock exchanged vows July 29th, 2006 on-board a yacht off the shore of Saint-Tropez, France, later making it legal on August 3 at a Beverly Hills courthouse. Not long after that, however, a sudden decision to split shockingly came from both parties as each determinedly filed for divorce papers on November 27th, in Los Angeles County Superior Court citing irreconcilable differences. A divorce settlement was signed by Los Angeles Superior Court Judge on February 1, 2007, officially ended the couple's four months marriage with neither party would be legally allowed to marry others until after May 28th, due to a minimum six-month waiting period. On October 6th, Pammy married Rick Solomon, most famous for the sex tape he made with socialite %cParis Hilton%, in a small wedding ceremony at The Mirage amidst her twice nightly appearance at the Planet Hollywood Hotel & Casino in Hans Klok's magic show.

In the meantime, Anderson's path in entertainment industry moved fairly smooth enough as she managed to land a leading role in "Blonde and Blonder" after her last big screen appearance in 2003's "Scary Movie 3." Slated for a 2007 release, the comedic flick not only puts her alongside %cDenise Richards% in the cast but also marks her first attempt to executive produce a big screen feature.