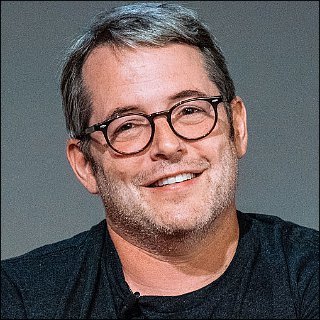 Well-trained onstage since young age to then consistently able to deliver engaging performances in various projects he has taken besides easily noticeable for his boyish look, Matthew Broderick surely is one gifted actor hard to be missed of. Never a stranger to the performing arts, particularly theatre, based on the fact that he is the son of film also stage actor James Broderick and playwright Patricia Biow, Matthew was born the youngest of the couple's three children on March 21, 1962 in New York City, New York, USA. Despite this background, however, the boy originally did not pay much notice on the field as he grew up and entered Manhattan's Walden School since his attention during that time was rather focused on athletic matters, especially football and soccer. It was when he accidentally experienced a knee injury in the middle of his study that the dark-haired teen finally began to try acting, later taking parts in the institution's theatrical presentations of "A Doll's House" and "The Threepenny Opera" among others.

By the time he nabbed the chance to appear with his father in an HB Studio's workshop production of Horton Foote's "On Valentine's Day" (1980), Matthew had already fallen heavily for acting that he thus fixed his mind to go professional in show business. Within a year, another role in an Off-Broadway play "Torch Song Trilogy" was successfully secured and so the audience then saw the guy portraying an adopted gay teen of a drag queen there alongside Harvey Fierstein and Joel Crothers. The show surprisingly was a big success, even received positive reviews from New York Times theater critic Mel Gussow which consequently brought him to the attention of Broadway as well as Hollywood. Found himself landed a part in both stage show of "Brighton Beach Memoirs" and film feature of "WarGames" by 1983, the young man amazingly nailed down the parts to obtain a Tony Award for Actor (Featured Role - Play) category in the same year while helped the latter one to gross out over $79 million domestically.

Kept striving high, Matthew eventually encountered his screen breakthrough when the movie in which he played the title role, "Ferris Bueller's Day Off", fantastically received both critical and commercial success after being released by 1986, leading him to secure a Golden Globe Award nod for Best Performance by an Actor in a Motion Picture - Comedy/Musical category a year later. As this achievement elevated him to widespread recognition, offers of roles consequently began flowing heavily afterwards so that it was not really surprising to see him spending the rest of the era filming a handful of movie features, including those of "Project X" (1987), "Biloxi Blues" (1988) also "Glory" (1989). Nevertheless, it appeared to him that the road ahead gloomily turned a little bit rocky in the early period of the '90s, mainly because most of his movies failed to fare well in box-office though he indeed scored an Emmys nomination in 1994 for supporting role category through his fine enactment in TNT TV-movie of "A Life in the Theater" (1993).

Refused to sink in desperation, Matthew continued to work his way persistently and concluded to make a return to theater in Broadway musical production of "How to Succeed in Business Without Really Trying" in 1995. His decision delightfully was proven to be a right one for he again won a Tony Award later in the year, this time was for Actor (Musical) category. Much to his relief, this triumph was wonderfully followed by satisfying commercial results of his movies like "The Cable Guy" (1996), "Godzilla" (1998), plus "Inspector Gadget" (1999) which garnered more than 60 million U.S dollar each in their domestic income. Glided rather smoothly afterwards, the actor optimistically went on his path for the next few years, going comedic in his 2004 movies of "The Stepford Wives" and "The Last Shot" then reprising his stage role as Leo Bloom in "The Producers" (2005) alongside other original cast of Nathan Lane, Gary Beach, and Roger Bart.

While 2006 still found Matthew circulating in comedy through "Strangers with Candy" and "Deck the Halls", 2007, however, only noticed him voicing Adam Flayman in DreamWorks' animated hit "Bee Movie" before he went back in front of the camera for various film genre in 2008. Among the list, there were dramatic feature "Margaret", rom-com flick Then She Found Me", and romantic drama "Wonderful World." Amid these projects, he willingly took time to again lend his voice for "The Tale of Despereaux", a Universal Pictures' animated adventure based on Kate DiCamillo's book of the same name.

Taking a look into his love life, Matthew has been known to have dated several actresses he met on the set of the film he was involved in, for instance Helen Hunt when filming "Project X" or Jennifer Grey, her co-star in "Ferris Bueller's Day Off" to whom he later engaged in 1986. As the knot was broken, he then was spotted romancing the likes of Penelope Ann Miller and Lili Taylor, but it was Sarah Jessica Parker that really captured his heart in the end. Being together for about five years, the couple eventually exchanged their marriage vows on May 19, 1997 in front of hundred family and friends at the Angel Oresanz Synagogue located on the Lower East Side of Manhattan. Always considered as one of Hollywood's role models in marriage life, the twosome then happily embraced the arrival of their son, James Wilke Broderick, by October 28, 2002.