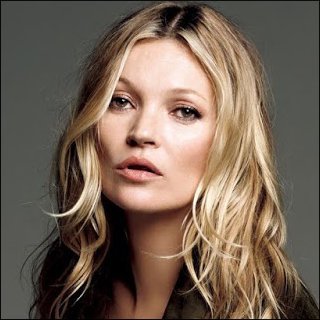 British supermodel Katherine Moss was born on January 16, 1974, in Addiscombe, Croydon, Surrey, England. At the age of 14, Kate was discovered by %cSarah Doukas% of Storm Agency and it was her starting point in building a career as a supermodel. She made her first appearance on the cover of a British magazine, The Face. Her look afterwards, has been familiar since she became the covers of some famous magazines, namely Elle, Allure, Vogue, and Arena. However, it was the US magazine, Haper's Bazaar that led her into the international fashion area.

Her thin figure and unusual low weight raise controversy on the trend of "waif" look that triggers anorexia toward inferior teenagers. In spite of her unhealthy image, she has appeared in some advertisements, such as Burberry, L'Oreal, Yves Saint Laurent, Cerutti 1881, Dolce and Gabbana, De Beers Simple Diamonds, and Versace. However it was Calvin Klein's which made her become unbelievably popular, thus being noticed as "The Face of Calvin Klein" due to her dominating appearances in those CK ads.

Besides being a model in magazines and advertisements, Kate went on catwalks for some designers, such as Chanel, Versace, and undoubtedly, Calvin Klein. Her face was also recognized in such music videos, as that of %cJohnny Cash%, %cPrimal Scream%, and %cElton John%. In 1996, she was granted VH1 Award as Model of the Year. High praise has been addressed to her as %cIsaac Mizrahi% once said of her: "She is the new definition of the word elegant." %cMarc Jacobs% gave her compliment: "She has a star quality bigger than the other models," while %cJohn Galliano% highly valued her: "She creates this wonderful vibe that inspires everyone. She is the catalyst."

Feeling not enough just being a model, Kate Moss took part in some movies, mostly playing as herself as seen in "Unzipped" (1995), "Catwalk" (1996), "Beautopia" (1998), and "Original Copies" (1999), although she indeed acted as Maid Marian in "Blackadder Back & Forth" in 1999 besides taking role in a TV series entitled "Inferno" (1992). She came down to the book-publishing field by launching her book entitled "Kate: The Kate Moss Story," containing a collection of her favorite pictures.

After breaking up with %cJohnny Depp%, Kate turned her love to %cJefferson Hack%, a magazine publisher. On September 29, 2002, their daughter, Lila Grace Moss-Hack, was born at St. John and Elizabeth Hospital in West London. However, her relationship with her daughter's father went worse, along with her exhausting condition as a result of hard working in modeling as well as raising Lila. All of these caused Kate to have a sleeping disorder which forced her seeking help from a top London clinic. After all, Kate Moss, who is labeled as the shortest supermodel in the world, is one of the high-priced supermodels of the nineties.

Unfortunately, this reputation was tainted in September 2005 when Kate's photographs of snorting cocaine appeared on the Daily Mirror's front page. The pictures were taken from a video footage which showed her taking the drugs when visiting her boyfriend, %cPete Doherty% of %cBabyshambles%, to his band's recording sessions. This awful behavior unmistakably led her to encounter a disaster in her career as some companies she had modeled for, like H&M, Burberry, and Chanel, refused to renew the contracts. Realizing she had ruined her own life, Kate thus quickly went to a rehabilitation center in Arizona, U.S. to get herself free from this addiction. After she's been there for some period of time, it was on October 27th that she reportedly out of rehab. A statement released by the London-based Storm agency said Moss left The Meadows clinic outside Phoenix earlier the week and was spending time with friends in the United States. She then would soon reunite with daughter Lila Grace, a moment she's been waiting for.

After on-again off-again relationship and the many bad publication surrounding their romance, Kate dumped Doherty and quickly found herself a new man, %cJamie Hince%, who is the guitarist for band %cThe Kills%.