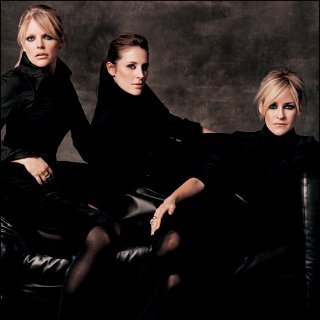 Smoothly released their 2006 album of "Taking the Long Way" after taking hiatus for about 3 years, Dixie Chicks surely aims to make the year a memorable period for their comeback into the country music scene following the announcement of their Accidents & Accusations Tour. First set to commence the North American leg of the tour, the group has been slated to start on July 21 in Detroit, Michigan to then go around numerous cities like Boston, Chicago, Oakland, Denver, Ottawa, Toronto, and Vancouver among others before closing it in Tacoma by November 11. Prior to this, the trio, who has participated on Good Morning America Concert Series held in Bryant Park on May 26, will also make appearances in London, England which takes place at Shepherd's Bush Empire on June 15 and Twickenham Stadium two days later as part of their promotional activities in the anticipation of the LP's international release scheduled on June 12.

Widely known as an all-female country music trio, Dixie Chicks was originally a quartet consisting of sisters %cMartie Erwin% (born on October 12, 1969 in Dallas, Texas) and %cEmily Erwin% (born on August 16, 1972 in Pittsfield, Massachusetts) plus %cLaura Lynch% and %cRobin Lynn Macy% when it was formed in Dallas by 1989 just a few months after the Erwin sisters' band, %cBlue Night Express%, ended its 5-year-old existence on the local circuit. With Martie and Emily providing the instrumental sound also background vocals while the other two taking the lead ones, the group first conducted their gigs on street corners in the city before advancing to the small clubs which gave them enough confidence to later release their debut album, “Thank Heavens for Dale Evans”, under independent label Crystal Clear Sound in 1990. As more people began to take notice afterwards, they gradually managed to land better stints such as at Kerrville Folk Festival or Austin Opry House opening for %cEmmylou Harris%, much to their delight.

Despite the good progress, the harmonious formation of Dixie Chicks sadly did not last long for Macy shockingly decided to quit the troupe not long after they produced their second work, "%Little Ol' Cowgirl%", in 1992, leaving Laura to fully assume the lead vocalist role in the group. Undeterred, these talented girls continued to make their third indie LP, “Shouldn't a Told You That” (1993), while strived to earn higher-profile appearances at Bill Clinton's Inauguration and Nashville's Summer Lights Festival. However, all the accomplishment apparently could not prevent Laura to keep staying in the line-up as she too walked out from the group by 1995, the same year Dixie Chicks secured a lavish recording deal with Sony Music's newly-revived Monument Records. Attempting to find her replacement, a former student from the prestigious Berklee College of Music named %cNatalie Louise Maines% (born on October 14, 1974 in Lubbock, Texas) was finally picked up and so making the troupe become a trio ever since.

Joined forces together, the three members of Dixie Chicks then persistently poured their skills to work on their first major album which was materialized in “Wide Open Spaces” released by January 1998. Featuring Emily on banjo, dobro, and guitar also Martie on fiddle and mandolin, the record instantly soared to the first rank of the Billboard Top Country Albums Chart besides spawned three #1 Hot Country Singles and Tracks songs namely “You Were Mine”, “Wide Open Spaces”, plus “There's Your Trouble.” The latter tune even won the group the Grammy Award for Best Country Performances by a Duo or Group with Vocal category in 1999 while "Wide Open Spaces" itself was named Best Country Album. Subsequently certified six-times Platinum by July of the same year, the LP certainly propelled the trio to the widespread recognition around the States as a new sensation in country music, giving them enough confidence to try hitting the market once again with their sophomore effort, "Fly", on August 31, 1999.

As expected, the result of “Fly” was tremendously fantastic for not only it was able to secure the first position on The Billboard 200 but also created a new record for being the album gaining most week at number one on Billboard Top Country Albums in mid 2000, thanks to its massive hits of “Cowboy Take Me Away”, “Ready to Run”, and “Without You.” Already contributed 2 more Grammy Awards to the group, this piece of work thereby solidified Dixie Chicks' position in the country music scene, leading them to gloriously top the 2000 Billboard Year-End Charts as the Top Country Artist - Group/Duo, Top Country Album Artist Top Country Artists, plus the Top Country Album Artist - Group/Duo. The success wonderfully still continued in 2002 when they came up with “Home”, their third LP which fabulously topped 3 Billboard charts of The Billboard 200, Top Country Albums, and Top Internet Albums to outstandingly gain six-times Platinum status in March 2003.

Unfortunately, the great attainment was tainted in the same month when Natalie sparked a controversy because of her statement in a London concert at the Shepherd's Bush Empire theatre saying that Dixie Chicks was ashamed that the President of the United States is from Texas following the run-up to the invasion of Iraq. As the remark immediately led to a boycott of the group's music, the blond singer then issued an apology admitting her being disrespectful, but it still failed to calm down some angry fans who thus generated the anti-Dixie-Chick feeling which included the loud boos at the ACM Awards ceremony during the announcement of the trio's nomination for Entertainer of the Year category on May 22, 2003. This consequently brought an impact to the sale of their next effort of that year, “Top of the World Tour: Live”, for it only made its way to peak on the 27th rank of The Billboard 200, far below what their previous works had achieved.

Determined to bounce back, Dixie Chicks afterwards tried to resurface with their next single “Not Ready To Make Nice” debuted exclusively on MSN Music by March 16, 2006 before was spread to the radio stations around the country. The result was quite satisfying as the song managed to climb 18 steps from 54th rank to 36th in just one week according to Billboard's Radio Monitor reported by Fox News by March 23, 2006 while later became the highest new entry for the week ending May 6 on the Billboard Hot 100. Following this, the group then optimistically released their fourth major album, “Taking the Long Way”, in stores on May 23, featuring 14 tracks produced by %cRick Rubin% which all were written by the three members alongside %cDan Wilson%.