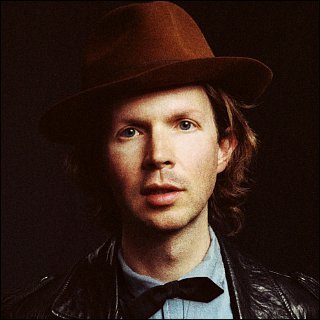 Beck was born Beck David Campbell on July 8, 1970, in Los Angeles, California, into an artistic, Scientologist family. His father was a conductor and string arranger, and his mother was an ex-Warholian actress. His grandfather, Alfred Earl "Al" Hansen, was a key Fluxus artist.

After dropping out of school when he was in the 10th grade, Beck began playing acoustic blues and folk music in local coffeehouses and as a street busker in the early 1990s. After trying to make it in New York, Beck was discovered in 1991 by the independent label Bong Load Custom Records, and while working with representatives from the label, he was persuaded to work hip-hop beats into his rock music. Recording with Karl Stephenson and Calvin Johnson, he released the single "MTV Makes Me Want to Smoke Crack" in 1992.

Beck followed it up with "Loser", which instantly became a local radio hit. It was featured on his debut album, "Golden Feelings" (1993). Signing to Geffen Records on a non-exclusive basis, Beck continued to release his music independently. He dropped his first EP "A Western Harvest Field by Moonlight" and his second studio album "Stereopathetic Soulmanure" in 1994. That same year, "Loser" was released nationally and became a generational anthem.

Beck later released his Geffen debut and third studio album, "Mellow Gold", which went platinum. Before the year ended, he released "One Foot in the Grave", his fourth studio project, via the independent label K Records. In 1995, he embarked on his first major tour.

In 1996, Beck put out "Odelay" that he made with Grammy Award-winning producers the Dust Brothers. Receiving massive acclaim from critics, the album, which included such hits as "Where It's at", "Devil's Haircut", "Jack-Ass" and "The New Pollution", earned Beck multiple nominations at the 1997 Grammy Awards including the coveted Album of the Year. He ended up taking home two Grammys for Best Male Rock Vocal Performance ("Where It's at") and Best Alternative Music Album ("Odelay").

Beck went on to release "Mutations" in 1998 and "Midnite Vultures" in 1999. In 2000, Beck won another Grammy for his duet with popular country singer-songwriter Emmylou Harris. In 2012, he returned with his eighth studio effort "Sea Change". He promoted the project with an acoustic tour. Around this same time, the artist announced that he'd adopted The Flaming Lips, fronted by singer Wayne Coyne, as his backing band.

After wrapping his "Sea Change" tour, Beck returned to the studio in 2004 to record his ninth studio project, "Guero". Featuring a duet with Jack White from the White Stripes, the album was released in March 2005 to great critical acclaim. Popular "Guero" singles included "Girl", "Hell Yes" and "E-Pro" which features a drum track by the Beastie Boys.

Beck's tenth studio album, "The Information", described as quasi hip-hop, was released in October 2006. His next album, "Modern Guilt", followed in July 2008. His 12th full-length "Morning Phase" arrived in February 2014. Receiving both critical and commercial acclaim, the album earned Beck two Grammys in 2015. The album came out as the winner in Best Rock Album and the prestigious Album of the Year categories. His win in the latter category came as a huge surprise and disappointment for some people who expected to see Beyonce Knowles' "Beyonce" or Sam Smith's "In the Lonely Hour" as the winner.