In Fairy Tale Land past, Belle's father arranges a meeting between her and Gaston. The two of them hit it off eventually. During a walk in the woods, they come across an ogre who had fallen into a pit. The ogre wars are the reason Belle's dad hopes she'll marry Gaston, whose family's forces will help them fight the creatures. Belle asks for some time to find out what the ogre is after.

Belle and Gaston do some library research. She hands him one her favorite books. Its title: "Her Handsome Hero." It's all about compassion and forgiveness--the things that truly make a hero. She gives it to Gaston moments before they almost kiss. Belle suddenly realizes that they need to find the Mirror of Souls to see if the ogre means to bring them harm. She's off to find it.

Belle returns to find Gaston hurt after being ambushed during the ogre's escape. The hunt is on for the beast. Belle still wants to use the mirror to be sure that the ogre is bad. She arrives just before Gaston can kill him. She knows that he's the real monster. The wounded ogre looks at Belle gratefully before heading into the woods. A short time later, the ogres begin their attack. Belle's father wants her to marry Gaston to save their kingdom. Belle has no choice but to say yes.

In the present day Underworld, Belle warns Rumple to not use any dark magic as they team up to save their child. Hades is upset to see a flower growing in the Underworld. That means hope has infiltrated his world. He pays a visit to Gaston, offering him a chance for revenge against Rumple, who thwarts the great hunter's first attempt at murder. Belle believes that they need to help Gaston move on. She finds a book titled "Her Handsome Hero." This makes her realize that she's his unfinished business.

Hades offers Belle a chance to keep her baby. All she has to do is let Rumple face Gaston. If one of them throws the other into the River of Souls, he'll take the mark off her baby. Gaston lets Belle know that he's tried to throw away the book Belle gave him because he believes it made her weak. Later, Belle stops Rumple before he can kill Gaston. She swipes the dagger. She commands Rumple to not hurt Gaston, who then tries to fire his arrow. Belle pushes him causing him to fall into the River of Souls.

Hades lets Belle and Rumple know that their contract is still valid. Gaston went into the river at Belle's hand, not Rumple's. In other news, Regina presses her sister for information about her relationship with Hades. She wants to know his weakness. Zelena believes that she's his only weakness. She later receives a gift. It's a dead flower. It looks like the one Hades pulled from the ground after his last meeting with Belle and Rumple.

Emma has a nightmare where her mother was attacked. The dream also gives her an idea as to how to remove the hero names from the headstones. The scene from the dream Emma had plays out, but they escape to Regina's vault before Mary Margaret can be hurt.

Emma feels guilty about bringing her friends and family into the Underworld. Mary Margaret assures her that they are there by their own choice and that they need to face the monster together. The beast turns out to be a wolf. Mary Margaret recognizes the creature. She throws a blanket over her as it turns into human form. Mary Margaret calls out a name to go with this familiar face. She calls out, "Red!" 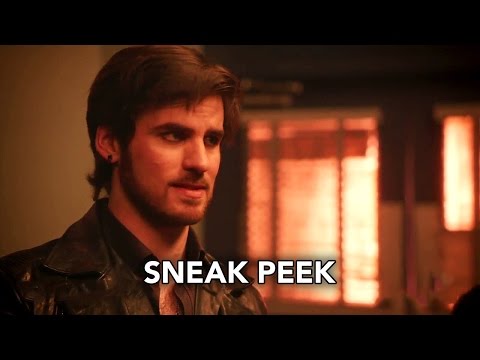