In the past, a young Cruella is chased down by several nasty Dalmatians. They belong to her mother, Madeline, who locks her away in a room. In the present day, Cruella admits that she left Lily in the woods way back when. This ticks off Mama Maleficent so much that she turns herself into a dragon. Cruella was counting on this. She unleashes some magic that forces the dragon to obey her command.

Cruella confronts The Author, whose name is Isaac. These two have a past together. Speaking of the past, a somewhat older Cruella has spent many years locked in her room. Her mother meets with a newspaper writer, who is actually Isaac. There's an interest in her dog-training techniques. Cruella has a better story for him though. If Isaac wants to hear it, he needs to break her out of her room.

Crullea heads out with Isaac to a dance club in what will eventually become her car. She says her mother poisoned her father. She likely did the same to her second and third husbands, too. Cruella and Isaac take a break from their chat to do a little dancing.

In present-day Storybrooke, Regina breaks the news that the Wicked Witch is still alive. She's headed for New York to save Robin Hood, but not before getting something she needs from Belle. Gold lets Isaac know that he's going to get ink for the quill. It's all part of his plan to turn the savior dark. Gold cuts their conversation short to meet with Belle. He shows her his hurting heart. Soon he will lose any ability to love. Only the author can help him.

Regina reveals that she has control of Belle's heart. If Gold breathes one word of her trip to New York to Zelena, he won't be the only one losing a heart. Emma gives Regina a gun for her trip. All plans get put on hold when Henry's moms learn that Cruella has kidnapped their son. He'll be safely returned once the Author is dead. Gold, however, needs the Author alive.

In the past, Cruella and Isaac share a magical night of dancing. They have a meaningful chat afterwards. Isaac reveals the truth that he actually uses a pen and ink that are enchanted with magic. He can change people's stories. He can use this trick to whisk them away. Isaac gives Cruella magic. She can control any and all animals. Cruella is overwhelmed, but she can't run off with Isaac just yet. First, she must face her mother.

Madeline reveals to Isaac that she didn't kill anyone. It was her daughter. She poisoned him and her next two husbands. Cruella takes the things you care about and destroys them. Isaac realizes his pen is missing. Later, Madeline tries to sic her dogs on her daughter. It doesn't work. Cruella uses her newfound magic to turn the dogs on her mother. She then dons her Dalmatian-style coat to let Isaac know she used him. Isaac's next action leads to turning Cruella into the devilish-looking person she is today.

In the present day, Henry escapes from Cruella's clutches. Pongo gives chase. Emma, Regina and Hook desperately search the woods. Gold is out there, too. As for Henry, he's trapped at a cliff's edge. Cruella pulls a gun on him just as Emma arrives. Elsewhere, the Author reveals to Mary Margaret and David that, in the past, he wrote that Cruella can no longer take the life of another. Emma doesn't know this. That's why she uses her magic to push Cruella off the cliff. A glow of darkness then fills her eyes. 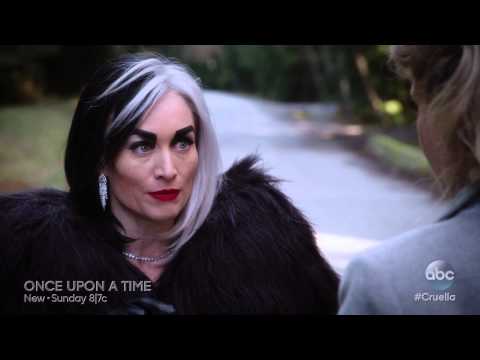 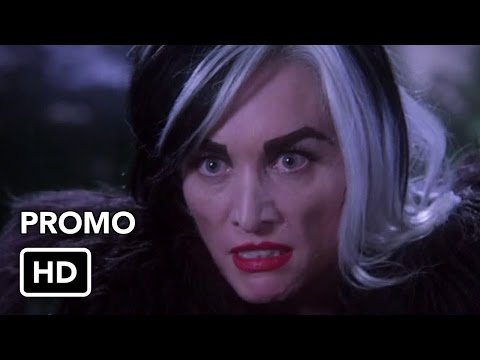