In Arendelle past, a young Ingrid must act when a brutal man attempts to abduct her two younger sisters, Helga and Gerda. Ice daggers shoot from her arms. They hit a tree branch that breaks. It crushes the attempted kidnapper. Ingrid is shaken. She realizes that she can't control her strange powers. Her sisters comfort her, vowing to keep her secret. They use three ribbons to symbolize a promise to always be there for each other.

Years later, an older Ingrid has become quite adept at hiding herself away from the rest of the world. This is all much to the chagrin of her life-loving sisters. Ingrid refuses to attend their father's 70th birthday bash. Helga introduces her dad to the Duke, who is in town on a diplomatic mission. The two of them share a dance. A sad Ingrid watches from afar as snowflakes magically descend around her.

Ingrid lets her sisters know that she has to go away. She can't control her power. Gerda suggests they find a sorcerer named Rumplestiltskin, who says Ingrid already has what she needs in the form of her sisters. A pair of gloves is offered to help conceal the powers. An urn which can trap Ingrid can serve as failsafe. Rumple wants the ribbons all three sisters have worn since they were kids in exchange for their deal.

Against the wishes of her sisters, Ingrid turns over the ribbons to Rumple. Later, she has a meeting with the Duke, who comes on to her. A gloveless Ingrid accidentally uses her powers to forcefully push him away. The Duke threatens to expose the truth about the future queen. He angers Ingrid to the point where she unleashes her power to accidentally freeze Helga. Her sister turns to ice and shatters before her very eyes.

Gerda now believes Ingrid is a monster. She traps her inside the urn. She then turns to Grand Pabbie for help assuring Arendelle's survival. She needs a memory potion to help everyone forget that Ingrid and Helga every existed. Grand Pabbie agrees to help with the warning that magic always comes with a price.

In present day Storybrooke, Belle discovers a spell that may be able to neutralize the Snow Queen's power. Emma and Elsa's practice run at using it doesn't go well. Emma still has her magical mojo going when she meets Mary Margaret at a new mommy class. She unwittingly boils a bottle of milk with her bare hands. This has Mary Margaret thinking twice about handing over her new baby to his older sis.

Emma must take a rain check on babysitting duties to magically capture the Snow Queen in the clock tower. The ensuing conversation has an angry Elsa having to leave the room. After she's gone, the Snow Queen claims that Emma's family may love her, but they also fear her. She freezes the entire sheriff's station so no one can get inside.

The Snow Queen tries to get into Emma's head. Her words have the desired effect. Emma is angered to the point where she can't control her powers. BOOM! An entire side of the sheriff's station is obliterated. Emma's friends and family rush to help, but she warns them to stay away. Things get intense. Another uncontrolled power surge causes a street light to fall. David is injured. Mary Margaret's initial angry reaction causes Emma to flee. A pleased Snow Queen watches from afar.

Robin Hood just can't stay away from Regina. He's angry at Will Scarlet because he nearly got him and the rest of the merry men killed. It was all over a woman. Robin Hood recalls how Marian made him the man he is. Even though Will was burned by true love, he still believes it's worth fighting for. Robin Hood agrees. That's why he plants a passionate kiss on Regina.

Emma cries alone in her car at the edge of town. The Snow Queen asks Mr. Gold to give her back her ribbons. She knows that he has plans to venture outside of Storybrooke. She's willing to help him. Gold can do whatever he wants with the rest of the world. All the Snow Queen wants is Storybrooke. She whispers what needs to be done to cleave himself from the dagger. Whatever it is, it's something that will give Gold great pleasure. 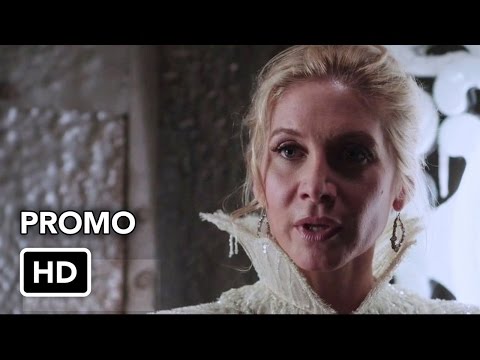