Come back Monday morning to watch the full episode, without signing in!

A long time ago, during a violent storm at sea, a woman wearing a crown atop her head writes a note. She places it inside a bottle. Both she and the man she loves realize that they may not make it home, but the message in the bottle just might. The woman says Anna and Elsa must know the truth. The man throws the bottle overboard just as the ship is overcome by an enormous tidal wave. Five years later, in a land known as Arendelle, Elsa and Anna lay flowers by the large stones that serve as a gravesite for the parents they lost at sea. They pay their respects before heading off to plan for Anna's wedding to Kristoff.

Elsa found her mother's wedding dress to hand down to her sister. She also gives Anna an enchanting snowflake necklace. Elsa finds a journal that leads her to believe she's to blame for the death of their parents. Anna vows to prove they didn't believe Elsa was a monster. Her future in-law, who happens to be a troll, tells the sisters that their parents were looking for a mysterious land called Misthaven. Anna wants to travel there to find answers. Elsa confronts Kristoff, and his reindeer Sven, as to the whereabouts of her sister. She learns that Anna is headed for Misthaven, which is known to its inhabitants as the Enchanted Forest.

In our world, in the present day, Elsa makes her way toward Storybrooke. Just about everyone in town has gathered at Granny's. Emma tries to comfort Regina, who is devastated that Robin Hood's true love has come to Storybrooke. Marian can't believe that her husband, or anyone for that matter, wants to associate with the Evil Queen. Henry worries that his mom's old habits may kick in. That appears to be what's happening with Elsa, who freezes an oncoming van into a block of ice so it doesn't accidentally run her down.

Robin Hood meets with Regina to tell her that he changed from a person he was in the past. She has, too. That's why Robin's feelings for her are real. However, he's married to Marian. He must make good on his vow to stay with her until death do them part. Regina knows that someone is standing in the way of her happiness. She needs her mirror's help to get rid of them. The plan is for Regina to go back in time to kill Marian. The mirror, aka Sidney, shows the day the Evil Queen confronted her. It's just what Regina was looking for.

Scared and confused, Elsa makes her way through town. Emma and Hook chase after the stranger who is leaving frozen footprints in the streets. As they close in, Elsa forms a giant snow monster that chases them off. There is panic in the streets as the snow monster heads off to the forest. Emma uses her magic to fight the monster, but only Regina can save the day. By doing so, she also saves Marian, who is starting to believe that perhaps she isn't a monster.

Hook thinks Emma is avoiding him. His feeling is confirmed. Emma feels guilty about what she did to Regina. She gives Hook a kiss to ask him to be patient. Then she pays a visit to Regina. She vows to help get her happy ending. Once Emma leaves, Regina asks her mirror to help her change fate. She believes she needs to find the writer of the book of fairytales so the stories can be changed. It's the only way villains can get their happy endings.

Mr. Gold recalls a memory of a time when his son crawled into his bed to say he was afraid. He believes that was the first time he felt like a man. Then he came across the dagger that turned him into the Dark One. He wants to find the strength to be the good man that his son died for. That's why he secretly gives Belle the real dagger shortly before they share their first dance together as husband and wife. Later, Gold finds a box that magically transforms into a hat with stars. He has no idea that Elsa has broken into a shop where she finds her Anna's snowflake necklace. She vows aloud that she will find Anna. She will find her sister. 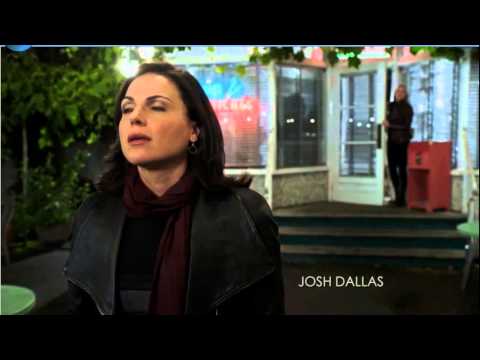