Hook leads his small group of followers on a clever robbery of a carriage carrying jewels. As it turns out, you don't need to be on a ship to be a good pirate. Mr. Smee offers his captain a lady of the evening for the evening as part of their celebration. Hook accepts his gift, but lets the lady know that she only needs to lie to others that they were together to earn even more pay.

Hook is clubbed on the back of the head by a woman who introduces herself as Ariel. She vows that he will pay for what he's done. She claims he kidnapped her Prince Eric. Ariel says the ship that took him was the Jolly Roger. Hook realizes that his ship has been stolen by the most cutthroat pirate ever to hoist a sail: Blackbeard. Hook is going after him. Ariel is also going to save her prince. Hook assures her that he's no hero. He's a pirate. He always will be.

Hook challenges Blackbeard to a duel. The winner gets the Jolly Roger. A mighty swordfight takes place. Hook gains the upper hand, so to speak. Blackbeard is down, but he still has leverage. If Captain Hook surrenders the Jolly Roger to him, he'll reveal the location of the deserted island where he stashed Prince Eric. That's too much to ask. Hook makes Bluebeard walk the plank. The Jolly Roger is his once more. Ariel is devastated. She slaps Hook calling him selfless and heartless. Ariel jumps off the plank vowing to find Eric as she transforms back into a mermaid.

In Storybrooke, Emma and David struggle to put together a crib. They take a break once Regina arrives with news that she's concocted a new protection spell for the baby. Emma lets her know that she's ready to learn magic. After she uses it to defeat the Wicked Witch, she hopes to go back to her old life. Hook assures her that's not really possible. His first mate, Mr. Smee, wants to skip out of Storybrooke on the Jolly Roger. The only problem is that it isn't there. Even if it was, Hook has no plans to leave because of Emma.

In an effort to show Henry that he and Mary Margaret are just as much fun as Hook, David tries to teach him how to drive. The lesson does not go well. In other news, Regina drags Emma down to her vault to teach her magic. Then she transforms her to be trapped on a collapsing bridge. Regina gets tough with her pupil. She forces Emma to save herself. Regina is ticked that she's been wasting her magic potential all this time.

Ariel washes up on the shores of Storybrooke. She's been searching for Prince Eric. Ariel has no recollection of Hook, but it's obvious the pirate remembers her. The two of them head over to Mr. Gold's shop where Hook finds a cloak that belongs to Eric. Ariel is overjoyed. Her prince must be somewhere in Storybrooke. Belle uses a locator spell to help track him down. The cloak leads Ariel and Hook to the docks where it disappears under the water. This may mean that Eric is gone.

Hook admits to Ariel that they had met before. He's ashamed that he sacrificed finding her true love to get back his ship. There's only one way Ariel can trust him now. He must swear in the name of his true love. Hook does as she asks. He swears on Emma Swan's name. Ariel is pleased. She declares that this is exactly what she wanted before revealing her true identity. Hook is stunned to see Ariel is, in reality, Zelena.

Zelena says that Ariel actually found Prince Eric. They've been living happily ever after on an island that was outside the range of the curse. Zelena used Ariel as part of her plan. Once Hook uttered the name of his love, she was able to curse his kiss. The next time his lips touch Emma's, all of her magic will be taken away. Hook realizes Zelena can't hurt Emma, but she can hurt those around her. This includes Henry. Hook is ordered to kiss Emma to remove her powers or everyone she loves dies.

Hook shows up at Emma's place. The story he tells about his day with Ariel is half true at best. Regina wants to look in on Ariel. She can do so with Emma's help. They see Ariel and Eric together on the island. This has Emma believing Hook is the one who reunited them. It only endears him to her even more. Hook tries to make a hasty exit, but Emma lets him know she doesn't care about whatever it is he isn't telling her. She's tired of living in the past. Hook knows exactly how she feels. 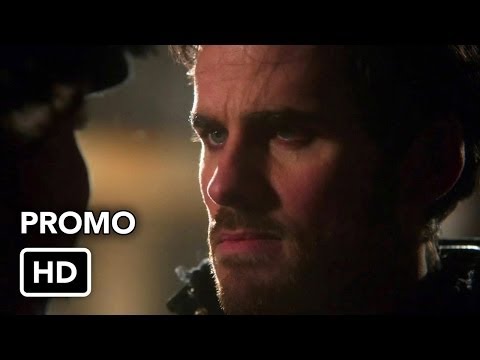