We jump back many years ago to see a man and woman find a baby girl. She dropped from the inside of a cyclone. It's evident that the child has special powers. The woman convinces her husband to keep the infant. They decide to call her Zelena as they make their way toward the Emerald City. The woman vows that the child will be the happiest baby in all of Oz. Years pass. Zelena's adoptive mother has died. Her drunken father reveals the truth that she was never their daughter. He believes she's wicked. Zelena is devastated. She's off to see the one person who can help her find a family who wants her. She's off to see the Wizard of Oz.

The mysterious wizard tells Zelena that her mother, Cora, gave birth to her in another land. A cyclone struck and carried her to this world. Zelana was abandoned because she couldn't give Cora the ability to become royalty. Oz says her sister, Regina, has the gift of magic just like her. Zelena wants Rumplestiltskin to teach her how to use the power. The wizard provides her with slippers that will take her wherever she wants to go once she clicks them three times. All he wants in return is something belonging to Rumplestiltskin.

CLICK, CLICK, CLICK. Zelena is transported to Fairy Tale Land where she meets Rumplestiltskin. He believes she can cast a curse that he's been working on for a very long time. Rumple speaks about the meat pies the spinsters used to make for him. Eating this tasty meal is the only time he ever forgot he was abandoned. Zelena realizes that the moment she stopped feeling like someone didn't want her was when Rumplestiltskin agreed to train her. She's upset to learn that Rumple is still training Regina. Her envy is turning her green.

In the present day, sadness envelops all of Storybrooke as Neal is laid to rest. Everyone gathers at Granny's place after the funeral service. Tinker Bell is upset when Regina rejects Robin Hood's attempt to get closer to her. Their conversation is quickly forgotten when Zelena shows up. She threatens to unleash the Dark One on anyone who crosses her. She reveals to Regina that she's her half-sister. Zelena wants her to meet her on Main Street at sundown. She invites everyone to be there to watch her destroy Regina.

Hook offers to tell Henry what his father was like when he was his age. They spend the day together. Henry wants to know the truth about his father. Hook tells him that Neal lost his father when he wasn't much older than he is now. He has more in common with him than he realizes.Regina finds a letter in her vault that proves Zelana is, indeed, her sister. Robin Hood approaches her to ask what's in the letter. It's from Rumplestiltskin. He believes Zelena is stronger than she is. If that's true, there's no way she can win the fight. Emma and the others are developing a plan to remove the Dark One from the equation. It's the only chance Regina has to survive. That's not going to be easy. Zelena is one step ahead of them. She sends Rumplestiltskin out with the message that he will kill them if they try to stop her.

Zelena gives a five-minute warning before she unleashes Rumplestiltskin on the crowd gathered at Main Street. Emma challenges Zelana, but the witch is too powerful. Moments later, Regina arrives. She wants to know what she ever did to Zelena, who is angry simply because she was born. She assures her sis that Rumplestiltskin can't save her this time. We jump back to Fairy Tale Land's past to see what she's talking about. Zelena tried to stab Regina to death, but she was tricked by Rumplestiltskin, who believes she loves him. That means Regina gets the job. This has Zelena turning green and vowing vengeance one day. That day has arrived.

The epic battle between the two sisters begins. Zelena proves to be the more powerful. She hurls Regina into the clock tower. She wants her heart. Zelena sticks her hand inside her sister's chest. She can't find what she's looking for. Regina says, "Our mother taught me one thing. Never bring your heart to a witch fight." This enrages Zelena. She flies off on her broom stick.

Regina lets the others know that Zelena wants her heart. She already has David's courage. Those are both ingredients. But for what? Later, Regina meets up with Robin Hood. He stood guard over her heart as part of their plan. Regina asks him to hold onto it a little while longer. Robin Hood obliges while reminding her that she still owes him a drink. Elsewhere, Zelena tells Rumplestiltskin that she will find Regina's heart. What she's casting isn't a curse. It's a second chance.

We jump back to Oz when Zelena tells the wizard that she wants to travel back in time to change the past. That's impossible, even for someone as powerful as him. Actually, the wizard isn't powerful at all. Zelena pulls down his curtain. She discovers the wizard is actually a man named Walsh. He's a circus showman from a land called Kansas. He doesn't have magic, but the things he collects do. Zelena has no use for Walsh in his current state. She needs someone who will do her bidding, like a trained circus animal. So she turns him into a flying monkey. She vows that when she's none with her plan, it'll be like Regina was never even born. 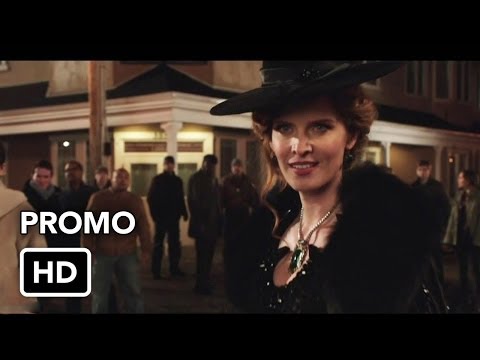