Belle leads Ariel to a man who is hard at work chopping off fish heads. This is the person she has been searching for. This is Eric. He recognizes Ariel immediately. The two of them share a romantic kiss. This magical moment is interrupted by something falling from the sky. It's the Jolly Roger! The passengers are treated to a hero's welcome when they finally arrive back in Storybrooke. Belle reminds Rumplestiltskin that she told him they'd see each other again. Another long overdue reunion occurs when Wendy sees her brothers, Michael and John.

Mary Margaret lets everyone in Storybrooke know that Regina helped save them all. Her words lead to recollection of a time in the past when the Evil Queen vows to destroy Snow White's happiness. Prince Charming wants to take his new wife's mind off this threat. They agree to kick off their honeymoon at the summer palace. That's where Snow's parents spent their honeymoon. Snow knows there's something there that will help defeat the Evil Queen once and for all.

Upon arrival at the palace, Snow White grabs her secret stash of arrows and a bow. She sneaks away in the woods where Charming is waiting for her. He could tell by the look on her face that she was up to something. His new wife spills the details of her plan. She wants to cut off the head of a mythical creature known as Medusa. If they can get Regina to look her in the eye, they can turn her to stone. But Medusa proves to be a formidable foe. Attempts to chop off her head fall short. Charming is trapped. He gazes into Medusa's eyes and is immediately turned to stone.

Medusa continues to hunt for Snow White, who is distracted by an image appearing in Charming's shield. It's the Evil Queen, who is relishing in the fact that Snow seems to be destroying her own happiness. These words hit home. They also give Snow White the idea to use the shield as a weapon. She steps toward Medusa forcing the creature to gaze at her own reflection. The gorgon immediately becomes stone. This turn of events frees Charming from his rocky encasement. Snow later lets her husband know that they need to start a family now. They need to fit good moments in with the bad.

In present day Storybrooke, no one but Felix knows that the boy everyone believes to be Henry is actually Peter Pan. The two of them work out their next steps. Meanwhile, the real Henry is trapped in Pandora's Box. The only one who can bring him out is Rumplestiltskin. Emma is a little confused when Henry doesn't seem all that excited to get back his big book of fairy tales. Neal, on the other hand, is pleasantly surprised to hear Hook say he's backing off his pursuit of Emma. He's in it for the long haul though should things not work out. Neal takes the hint. That's why he asks Emma out on a date.

Rumple/Mr. Gold gives David an elixir to cure his dreamshade poisoning once and for all. It's good stuff. David feels much better. The same can't be said for Neal, who has been stood up for his date. David has a chat with his daughter about this. Emma has a lot on her mind. She doesn't feel like Henry is himself. She has a feeling something bad might happen. David encourages her to look for the good stuff in life like, perhaps, having lunch with Neal.

Henry asks to spend the night at Regina's place. He asks about her vault of magic under the guise of being worried about Pan. The shadow that was trapped in the sail of the Jolly Roger is set free. It attacks Mother Superior/Blue Fairy killing her instantly. Hook, who has just been rejected while propositioning Tinker Bell, knows there's only one person who gives order to the shadow. He knows Pan is behind this. Emma asks Regina to keep an eye on Henry. She has a gut feeling something is wrong. Regina doesn't share her concern. That's why she takes him to her vault.

Emma wants to release Pan from the box. Mr. Gold does so just outside Storybrooke where there is no magic. Henry tries to tell everyone that he's not Pan. He tells Emma about the time they first connected. He knows the reason she gave him up was to give him his best chance. This is good enough for Emma. She knows this is her son. Soon everyone else does, too. Now they just need to find the real Pan, who renders Regina unconscious in her vault.

Emma realizes that the price of being the savior is that she doesn't get a day off. She must get to work right away once Mr. Gold opens the vault. Pan is gone. Regina regains consciousness only to blame herself for falling for Pan's scam. She wanted so desperately to believe that her son still needed her to be his mother. The real Henry assures him that he does. He gives her a heartfelt hug.

As for Pan, he stole something from the vault. Something very dangerous. He stole the curse that tore everyone from the Enchanted Forest and sent them to Storybrooke. If he casts the curse now, everyone will forget who they are. Time will stand still. Pan will be in charge. When he's done with his plan, Storybrooke will be the new Neverland. 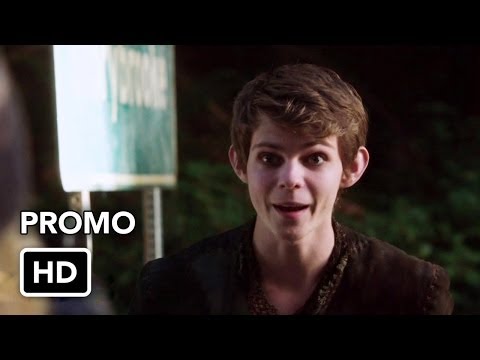