"No one is getting through that...." We're in Storybrooke where August, aka The Stranger, just finished installing a solid wooden slide-bolt lock on Emma and Mary Margaret's front door to keep Regina, and her skeleton keys, out. It seems they don't want the Mayor over for another one of her unexpected visits, especially now that Emma has declared that she's going after custody of Henry.

Speaking of Henry, he calls a "code red" for Operation Cobra, which has Emma dashing off to Granny's to meet him. On the way, August tries to convince her to take the day off and go with him, saying if she wants to beat Regina, she needs to "look at the big picture." But Emma doesn't have time for taking a leap of faith on August, she's focused on her son.

And Henry is focused, as usual, on his book of Fairy Tales. He's just realized that someone has added the story of Pinocchio to the book, but didn't finish it. Could this be what August was doing with Henry's book back in episode 113, What Happened to Frederick.

Through Henry's book we flash into Fairy Tale Land, where we see Geppetto and Pinocchio trapped on their raft on stormy seas with Monstro the Whale baring down on them. Geppetto insists that Pinocchio take the only life preserver, but Pinocchio says he can float because he's made out of wood, and heroically leaps overboard. When Geppetto awakens on the shore the next morning, he finds his wooden boy lying lifeless on the water's edge. The Blue Fairy appears and, with tears in his eyes, Geppetto begs her to save him. With a wave of her wand, the Blue Fairy turns Pinocchio into a real boy, bringing him back to life. Before she leaves, the Blue Fairy tells them both that as long as Pinocchio remains brave, true and unselfish, he will always be a real boy.

Back in Storybrooke, we find August holding the same hat Pinocchio was wearing as he calls Mr. Gold to make an appointment to talk about a "problem" with Emma. As he heads out the door, he doubles over in pain, clutching his left leg. As his pant leg rolls up, we see what's causing him so much pain --- his leg is turning to wood. August is Pinocchio!

At Storybrooke Elementary, Regina runs into Mary Margaret and things are icy to say the least. Regina is sticking to the story that Sidney was behind the whole thing, but Mary Margaret is clearly not buying it. This is no longer the meek schoolteacher we're used to seeing around Regina. Instead, Mary Margaret tells the Mayor that she forgives her and that she pities her--that her life must be so full of loneliness if she can only find joy in taking away everyone else's happiness. Afterwards, when Regina speaks with Henry about transferring him to a new class, he follows suit and openly defies her, telling her that The Curse will be broken and good will win. It looks like Regina is slowly losing her grip on the people of Storybrooke.

August meets Mr. Gold at his shop, but he's not alone. Marco --Geppetto in FTL--is there looking at an old clock that Mr. Gold wants fixed, and August stops short. This is the first time he's seen his father since coming to Storybrooke. As Marco heads out, Gold takes notice right away, clearly having planned this "chance" encounter and demonstrating to August that he knows his real identity. August asks Gold for help in convincing Emma to listen to him, insisting that she's so focused on getting Henry back that she won't listen to anything else. Mr. Gold agrees to give Emma a nudge in August's direction when she comes to him for legal advice. A little while later, Emma does in fact go to Mr. Gold for help and he turns her down, as promised. As planned, she heads off to find August.

Back in Fairy Tale Land, Geppetto is teaching Pinocchio how to fix a clock--one that looks very similar to the one we just saw in Mr. Gold's shop--when the Blue Fairy arrives with bad news. The Curse is coming and it's up to Geppetto to create a vessel from the last enchanted tree in the forest that will keep Snow White's unborn baby, the savior, safe. Geppetto agrees, for the good of his son.

In Storybrooke, Regina's bad day continues. This time, it's a dead battery in her car full of groceries. Luckily, David is nearby to give her a lift home and she invites him to stay for dinner. He turns her down and helps her inside. As he's about to leave, Regina finds a note from Henry saying he's having dinner with Archie tonight after his session. Only it doesn't say that. The note is blank! Has Regina planned this whole thing? Well, whatever plan she has, it's working, because David changes his mind and decides to stay for dinner.

In Fairy Tale Land, the Blue Fairy takes Geppetto, Pinocchio and Jiminy to the last enchanted tree and tells them that the tree has enough magic to protect two from The Curse and that it should be Prince Charming and the pregnant Snow White. But wait. Didn't she say there was only enough magic for ONE back in the first episode? When the Blue Fairy tells Geppetto about The Curse, he's frightened that Pinocchio will turn back into wood when it strikes and be lost forever. The Blue Fairy asks him to have faith in The Savior, but that's not good enough. He gives her the ultimatum that he will only create the vessel if Pinocchio can be one of the two it saves. The Blue Fairy reluctantly agrees and we once again see her telling everyone about the plan to create a vessel for The Savior, just like we did in the first episode. But this time we notice the glances between the Blue Fairy, Geppetto and Jiminy--the only ones who know the truth about the tree's magic.

Back in Storybrooke, David and Regina are finishing dinner. He clears the table and she tells him the story about how she found him. It's very intimate and the two of them are uncomfortably close when Regina begins to lean in to kiss David! But he recoils, turning her down as gently as he can, saying that they should just be friends. He heads home, and when Regina's alone, she furiously smashes a mirror with her wine glass. It looks like the day hasn't gone as planned after all.

Flash back to Fairy Tale Land and The Curse is pouring over the land as Snow White is giving birth to Emma. The Blue Fairy arrives to tell Geppetto that circumstances have changed. With Emma being born, they now need both spots in the enchanted wardrobe for her and Snow White. Pinocchio can't go, because Emma needs her mother to care for and protect her so that she can grow up to break The Curse. But when the Blue Fairy leaves, Geppetto decides not to tell Snow White or Prince Charming the truth. Instead, he turns to his son and tells him that he must still go, but it will be up to him to care for and guide Emma--to make her believe--so that one day she can break The Curse and father and son can be reunited. Pinocchio promises he will take care of her and Geppetto tearfully hugs his son goodbye before closing the wardrobe. The room shakes and when the wood carver opens the doors again, Pinocchio is gone.

On the road not too far from Storybrooke but definitely out of town, August and Emma pull up to a little roadside diner--the same one where she was found as a baby. Emma immediately recognizes it and asks August what the hell is going on. He reminds her that she was found by a seven-year-old boy and tells her that boy was him!

Flashback to the woods not far from that diner where suddenly a chunk of a tree comes flying off and a young Pinocchio steps out into our world for the first time. As he touches the tree, a wave of energy flows over him, knocking him to the ground and reminding him of his life in Fairy Tale Land. Suddenly, another pulse of energy shoots out and baby Emma is lying there in the tree that Pinocchio just stepped out of.

Back in the present, August is trying to show Emma that very tree. He tells her about her baby blanket, the one she still has, but when he comes clean about The Curse being real, she can't believe it. He tells her that he is Pinocchio and that he and everyone in town need her to save them, but she can't do it. She refuses to believe and take on responsibility for everyone's happiness. Even when August tries to show her his leg turning to wood, she can't see it. Her denial is so strong, she literally can't see the truth.

Flashback to Boston and a foster home where baby Emma is crying. Young Pinocchio cheers her up while trying to fix her crib when he is scolded for touching tools that don't belong to him. When another boy shows Pinocchio a roll of bills--enough to buy all of the older kids bus tickets out of there--he asks if Emma can come with them. But the older boy says they can't take care of a baby. Pinocchio faces the choice of getting out of there on his own or keeping his word to protect Emma. In the end he chooses to go, leaving Emma to fend for herself; setting her on the path she's been on ever since.

In present day Storybrooke, August goes to see Marco. He helps him fix the old clock and asks if he can stay on as Marco's assistant. Marco can't pay him but August says, that's okay he "just feels like fixing things."

Emma wakes Henry up with a call on his walkie-talkie with her own "code red." He gets in her car and she asks if he wants to come live with her. When he says "more than anything," she tells him to buckle up, "We're leaving Storybrooke." 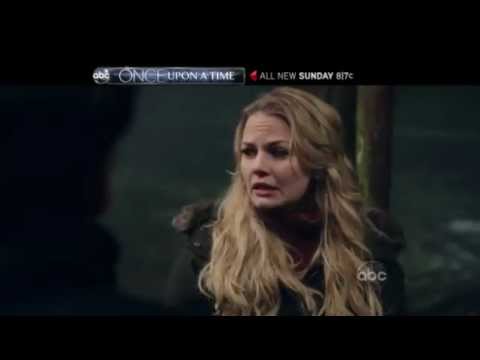