Elijah (Andrew Rannells) prepares for an open-call audition for a new Broadway musical, but is thrown off his game by an unexpected visitor. In need of cash, Marnie (Allison Williams) tries to pawn a family heirloom and gets a wakeup call from an unlikely source. Hannah (Lena Dunham) reconnects with Paul-Louis (Riz Ahmed).

At work, Elijah's colleague informs him the internet is buzzing with news that his ex, Dill Harcourt, turned to the black market in a scandalous attempt to buy a white baby. Elijah plays it cool and changes the subject: He's auditioning for the musical White Man Can't Jump.

Hannah tries to help Elijah rehearse, but she's distracted, anxiously waiting for Paul-Louis to return her phone call. Dill arrives unexpectedly, distraught and desperate to hide from the paparazzi. Caught off guard, Elijah relents and lets Dill stay while he heads off to audition.

"All I've ever done is love somebody." - Marnie

Marnie arrives home after a run and finds an eviction notice on to her door. She hasn't been able to pay her bills since Desi walked out on the band. She frantically calls Evie for money, but Evie only offers a place to crash. Marnie decides to pawn her jewelry, only to discover neither her necklace (a family heirloom), or her earrings are real. The pawn shop owner suggests she start taking responsibility for the way her life has turned out. Marnie opts to move back in with her mom, and leaves a voicemail for Desi apologizing for her actions and wishing him well.

A panicky Elijah is set to make a quick exit from his audition when he runs into a fellow actor, Athena. Her confidence and energy inspire him to go through with the tryout. After nailing his song, Elijah manages to stumble through a dance number, but things go south when he's handed a basketball to incorporate into the choreography.

"Yea, everyone said it was like so important. But now I feel like maybe it was a mistake." - Hannah

Hanging out with Dill at the apartment, Hannah gets a call from Paul-Louis (Riz Ahmed). She tells him she is pregnant with his baby, but assures him she will care for the baby herself. Paul-Louis is relieved to hear Hannah doesn't expect him to be a part of the baby's life. He suggests the name "Grover" for a boy before hanging up. Realizing she really will be raising a baby on her own, Hannah turns to Dill, who comforts her before breaking down as well.

Lying in bed with Dill that night, Elijah wakes to a phone call from the casting directors: They want him to come in for the second round of auditions. 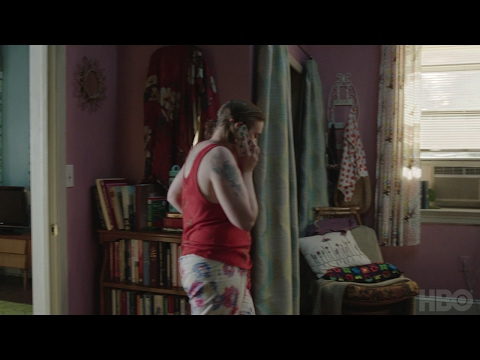