Adam (Adam Driver) and Jessa (Jemima Kirke) begin shooting scenes for their film, but she questions his creative direction. In town to visit Hannah (Lena Dunham), her mother, Loreen (Becky Ann Baker), has a hard time accepting the next phase of her life. Marnie (Allison Williams) does a less-than-stellar job of being there for a grieving Ray (Alex Karpovsky).

Shoshanna checks on Ray after Hermie's death. Ray reveals Hermie had scleroderma, an obscure terminal illness with no external symptoms.

Adam acts out a kinky sex scene with Genevieve, the woman cast as Hannah in his film. Jessa tells him it should be clearer he is annoyed with the Hannah character, but Adam doesn't agree.

In town visiting, Loreen tells Hannah she's picked up an interest in medical marijuana, and is traveling with marijuana-infused gummies. Hannah reveals she is pregnant, and Loreen is astonished.

"Wow! This is not what I was expecting." - Loreen

An excited Ray shows Marnie old photographs of Hermie, but he quickly picks up on Marnie's lack of interest. When he attempts to show her one of Hermie's VHS collections, she thinks of a lie to get out of it. This is the last strike for Ray, and he decides to break up with her.

Jessa and Adam have another argument about their film's creative direction. Jessa refuses to acknowledge Adam and Hannah's deep and complex relationship.

"It's about a relationship that is so intense it starts to eat away at our protagonist." - Adam

Helping Hannah with her laundry, Loreen shares how much she enjoyed her own pregnancy. Hannah is worried Loreen is eating too many weed gummies, and the conversation takes an ugly turn when Loreen confesses how lonely she is. Hannah tries to cheer her mom up, but Loreen isn't ready and storms out of the laundromat.

Hannah and Elijah frantically scour the city for Loreen. They find her at a restaurant, extremely high and delightedly eating alone. Hannah attempts to control the situation, but Loreen winds up telling Elijah about Hannah's pregnancy. Elijah reacts poorly, and tells Hannah she is making a horrible mistake.

Hannah arrives home to find Genevieve on the steps of her apartment. Joining her on the stoop, Hannah realizes Genevieve is playing her in Adam's film. Genevieve, a mom of three, gives Hannah reassuring and positive advice about motherhood. 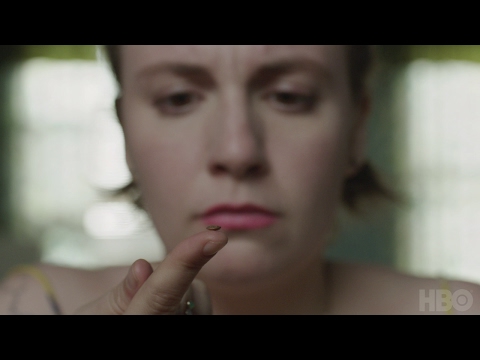