Stunned that Adam has found a new girlfriend, Hannah stands in her unrecognizable apartment nearly speechless. Mimi-Rose leaves to buy a cold-pressed juice so that Hannah and Adam can talk in private. Adam insists he didn't break any rules by dating someone else, except, as Hannah points out, the rule of "common human decency." When she asks about her belongings, Adam explains that he's been paying for a storage unit in Fort Greene. "Well thank you, Mr. Rockefeller," Hannah spits. "Another grand romantic gesture from the last of the red-hot lovers." She excuses herself to "rest," locking herself inside her old bedroom.

Adam scrambles to round up Hannah's friends in an attempt to calm the situation. Shoshanna arrives and notices a large tapestry hanging on the wall of Hannah's bedroom. Hannah angrily pulls it down, only to discover the wall to the second bedroom has been knocked out, converting the rooms into the "master suite" she and Adam had once discussed making with their "bare hands." Shoshanna insists they find out everything they can about Mimi-Rose. They discover a video of Mimi-Rose giving the keynote address for a visiting artists' lecture. Reconsidering her advice, Shoshanna orders Hannah to stop watching the video and go with her back to her apartment, but a heartbroken Hannah decides to hide under the covers instead.

Jessa arrives and asks why Hannah isn't "in Idaho." She reveals she knew about Mimi-Rose. Jessa swears she told Hannah about her, and it becomes apparent that she is the one who set up Mimi-Rose and Adam. "What were we supposed to do?" Jessa asks, confused by Hannah's anger. "Sit around flicking our clits until you got back?" Hannah punches Jessa in the arm; Jessa responds by hitting Hannah upside the head. "You're a f**king bitch," Hannah tells her, before diving back under her blanket.

That night, Hannah leaves Marnie another message threatening that this will be the last call of their friendship because Marnie hasn't been there for her "in what could constitute the worst moment" in her entire life. With trepidation, Hannah peeks out into the living room to find Caroline and Laird on the couch; Adam and Mimi-Rose traded apartments with them for the night. Caroline admits that while Adam is very happy with his new girlfriend, it may not last. "He's really at his best when he's nurturing the poor, the lost, the profoundly damaged," Caroline explains. "Which is why you were so perfect for him."

Hannah wakes the next morning to find Ray in the apartment preparing breakfast. He tries to comfort her but is clearly distracted by his ongoing neighborhood noise pollution problem. Hannah tries to flip the bacon for him, but winds up with a bad burn on her hand. While Ray dresses her wound in Adam's "workshop," Hannah asks if Ray's anger is really about Marnie's relationship with Desi, but he brushes her off. "I was her whore, her f-buddy," Ray says. "I'm not the type of person she's going to end up with. I get that."

Alone again, Hannah watches Mimi-Rose's keynote address. Marnie arrives -- with food -- and sincerely apologizes for not answering her phone. Still mad, Hannah runs into the bathroom and fakes a shower in order to avoid Marnie and continue her Mimi-Rose research.

Unconvinced by Hannah's charade, Marnie reminds Hannah that she left Adam and needs to let him go. "If you don't give him the space to at least see where this goes, he's going to hate you forever, and you'll hate yourself."

That night, Adam returns as Hannah prepares to leave. He takes note of Ray's bandage handiwork and insists on re-doing it, grumbling, "Guy fancies himself some kind of Renaissance man but he doesn't know jack shit about f**k." They have a heartfelt conversation about what's happened between them, and Adam admits he was relieved when she left. "Did you think it was working between us?" he asks. He acknowledges that there was a time when he couldn't imagine himself with anyone else, but that time has passed. Adam says it makes more sense for her to stay in her apartment, but he'll need a few days to move out. They say their goodbyes and Hannah treks to her storage unit and finds her old furniture. She lays down on her couch to rest. 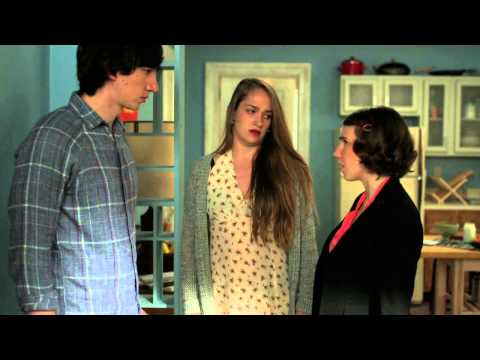