Hannah catches up with Jessa via video chat and marvels over how much free time she has with her class only meeting once a week. "I made these brownies myself from scratch using just a mix," she brags, "and they're good." Jessa asks how Hannah's writing is coming along, but Hannah hedges. "Right now I'm more in a pre-writing phase, but it's all happening…or…will happen."

Marnie talks to Ray about her concerns regarding her affair with Desi, insisting she isn't a mistress because he does things like put his hand on her butt when they're in line at Starbucks or make her look at him when he has an orgasm. Ray insists that Desi is not to be trusted, and besides, Marnie has overlooked Desi's biggest character flaw: He hasn't chosen Marnie over Clementine. Moved by Ray's kindness, Marnie leaps into his arms and kisses him.

Shoshanna has a successful interview at Ann Taylor Loft, where she is informally offered a position that appears to be a perfect fit. However, Shoshanna reveals to her interviewer that she knew in her "heart of hearts" that this was just a "trial interview" and won't be taking the job.

Desi and Marnie meet with record label execs, who love their sound and want them to meet with the label's manager, Marcos, as soon as he's back in the office. Things take a turn for the worse when the execs ask about Marnie and Desi's relationship, and Desi denies they're together. After the meeting, Marnie tells Desi she won't continue to be his mistress. "We're building a musical future together," she tells him. "So why the f**k do you still have a girlfriend who isn't me?"

While walking with Adam after an Alcoholics Anonymous meeting, Jessa stops to pee on the street and is caught by the police. When she rips up her summons in front of them, she's arrested; Adam intervenes when Jessa claims they're hurting her, and he's arrested as well.

Hannah and Elijah attend a party thrown by the Writers' Workshop poets. Hannah finds herself in low spirits, uncomfortable having to socialize with all of her classmates, whom she feels have ostracized her. Making matters worse, she's hit a creative block. "Everybody's saying it's such a gift to have all this time to write," she complains, "but how come the only thing I want to do is Google that one month where Woody Harrelson and Glenn Close were a couple?" Elijah encourages her to quit if she's not enjoying herself, admitting that he felt enormously relieved when he gave up his dreams of being a dancer.

Later, Hannah sits with her classmates discussing popular literature and admits that she feels pigeonholed by them for writing "one story with a blow job in it." She launches into a rant about how female writers are subjugated in the literary world, but goes a step too far when she gets personal with her criticism and tears individually into her fellow students.

Ray bails Adam and Jessa out of jail, though he's far from happy about it. Adam, no longer enchanted by Jessa's antics, tells her she needs to grow up. He heads off alone claiming that he doesn't need any more friends. Jessa, however, drops her veneer of indifference and admits that she does.

Hannah leaves the poet party alone and discovers that her new bike, which she triple-chained to the porch railing, has been stolen. She hitches a ride in a Mennonite buggy, the driver putting his arm around her as they head down the road into the cold, lonely night. 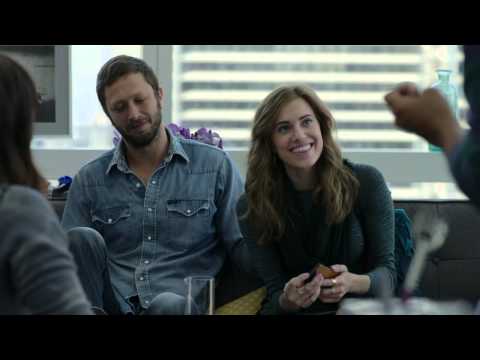