Hannah has brunch with an editor who loves her essays and wants her to write an e-book... in a month.

In bed together, Marnie and Booth are interrupted by Soo Jin, his sassy assistant. He flips out over the tiny bite she took of his rosewater ice cream, and she promptly quits. With Soo Jin gone, Booth asks Marnie to play hostess at the party he's throwing that night, and she is thrilled to oblige.

Ray is forced to go to Adam's in search of his copy of Little Women, which Hannah left there but refuses to retrieve for awkwardness reasons. Unfortunately, the book is in Adam's bathroom-along with a vicious dog he stole after deciding that its owner was mistreating it. After Ray convinces Adam to return the dog to its home, Adam insists he come along as back-up-the owner looked tough.

The boys head to Ray's least favorite borough to return the dog: Staten Island. During the journey, Ray is surprised to discover that he and Adam aren't so different after all. He suggests it's because they're both honest men; Adam thinks it's because they're both kind of weird looking. The harmony between them quickly goes south, though, once Ray speaks ill of Hannah and Adam becomes angry and defensive. Adam runs off, leaving Ray with the dog.

Hannah shows up to Marnie and Booth's party but instantly feels out of place in the artsy crowd as Marnie, in a strange plastic dress, is totally preoccupied by her new friends. She takes off to go home and work on her e-book. When Booth thanks Marnie for her help with the party and asks if he can throw her $500, Marnie is stunned to realize that Booth doesn't think of her as his girlfriend.

When Ray finally locates the dog's home, the owner's brash daughter refuses to take him back, threatening Ray with a gun and firing a barrage of insults and slurs at him. Ray is surprised by how much her words hurt and finds himself stuck on Staten Island with the dog as night falls.

Hannah calls Marnie to talk, but neither manages to be honest with the other. Hannah claims she left the party because she was inspired to write, and Marnie, heading home from Booth's, claims she is in his garden watching fireflies. 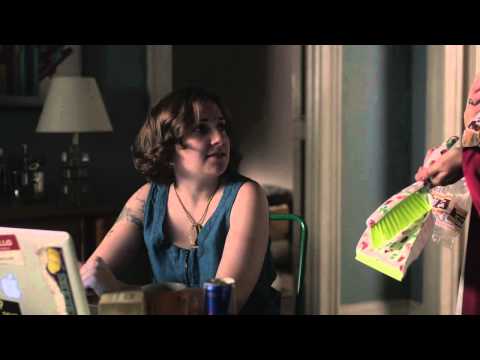