Allison's brother is coming to visit Eureka, and though Jack is initially excited to meet his new wife's genius brother, Kevin warns him that Uncle Marcus is not kind to folks with IQs below 160. Allison's not worried, though, since she loves Jack exactly the way he is. And Kevin seems to be letting it go - he asks Jack to help him with a presentation for his science class, and offers him one of Vince's special lattes.

Holly, however, is miffed that Fargo is being so cautious about letting her out of the house. He doesn't want to damage her, but she's going crazy not being able to touch anything. She sneaks up to Zane and makes her case. He agrees to help, and enlists Henry and Jo for help, but all three will have to work behind Fargo's back. Their plan is brilliant - they'll actually build an organic lattice for Holly's consciousness to inhabit, so that they can link her to a body that will essentially be a copy of her own body.

The plan is thrilling, but very risky, and to make matters worse, Parrish is bent on bringing Zane down after learning that the latter was promoted to head up Sector 5. Jo attempts to distract him, but eventually he learns of the plan, and immediately informs Fargo, who shuts down the experiment. Holly may not be able to forgive him.

The uncomfortable family dinner with Marcus gets even worse when Carter spouts a factoid from Marcus's research. Carter realizes that Kevin went over his presentation so that Jack would be able to zing Marcus. But that night, curiosity takes over Jack's mind. He reads Marcus's book, then Allison's, and the next day, builds the type of processor that Marcus and his colleagues had only theorized about. Marcus is awed, and Jack is spurred on by his newfound grasp of thermodynamics, and goes to insert the processor into Deputy Andy, increasing his computing ability.

Allison is disturbed by the change in Jack, especially since it seems to have removed his feelings. She soon realizes that Kevin, with the best intentions, slipped a cognitive enhancer into Jack's coffee, and it's taking over his brain. Meanwhile, Andy needs more and more power to fuel his new capacity and goes on a power binge, sucking wattage all over town. He, too, seems to have lost his emotions, for he heads for the power source he loves most - SARAH - to drain her of all she has.

But Allison and Jo, thinking like Carter while Carter thinks like Marcus, are able to cut Andy off at the pass. They rewire SARAH to zap Andy, and convince him to have the chip removed. Jack performs the operation, and then, humbled by the fact that he almost let Andy die from power overload, submits to a modification of his own. Allison administers a serum she created to reverse the cognition enhancer, and before long, the man she married is back to his lovable, loving self. Marcus sees how harmonious they are together, and serves as the witness for their legal union.

And Fargo sees that his caution came only from his fear of Holly leaving again, an event that would devastate him. But, he realizes that life as a hologram is no life, and if he's truly going to love Holly, he has to give her what she wants. He tells her he'll help her in any way he can. 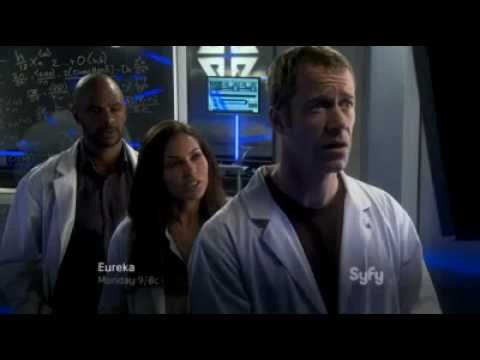