Allison knows something's up with Jack when he shows no concern that Zane has been arrested for trying to protect Grace. But Jack's not the only one acting funny - Henry, Andy and Jo are all behaving suspiciously. Allison speaks to the two people who still seem normal - Zane (released after no evidence was presented to hold him) and Fargo. When Fargo is the normal one, you know something's off. The three discuss Holly's body printing and Grace's escape from jail - a most uncharacteristic move - and decide that since Shaw's DNA isn't on file in Eureka, he could help them out of this mess.

But as soon as Fargo approaches Shaw, Jo distracts the military man with a trumped-up lead on Grace. What neither Fargo nor Shaw know is that Henry's body double broke Grace out of jail in order to return her consciousness to Virtual Eureka. Fargo, Zane and Allison avoid the doubles, since they realize that these are not their friends, but the non-player character consciousness from Virtual Eureka, attempting to round everyone up. All around them, Astraeus crew members are changing until it feels like they're living in a world of pod people.

Allison goes to make sure her kids are safe while Zane and Parrish (whose double Zane liquefied earilier) build a pulse bomb that will neutralize the z-waves of all NPCs and Fargo calibrates the Smart Dust controller that will allow the pulse to travel throughout Eureka, and they all plan to reconvene at Jack's cabin.

But the best-laid plans always fail: Zane is captured, and the only possibility of success is to hope that the pulse bomb is in Zane's pocket, on his unconscious body. They follow Holly to the warehouse where row upon row of scientists lies silent, their thoughts being harvested by the NPCs, and search for Zane. On her way, Allison spots Jack and pauses to try to wake him up, but has to move on. She finds Zane, but before she can activate the bomb, NPC Jack approaches with NPC, 6-year-old Jenna, using her as a distraction to capture Allison.

But before NPC Jack can hook Allison up to the matrix, Real Jack regains consciousness and knocks "himself" out, allowing the two to escape. The two realize Fargo must have been captured and his Smart Dust controller deactivated, meaning their only chance to broadcast the frequency that will knock out the NPC z-waves is the satellite dish at Jack's cabin. They run as quick as they can as the hollow shells of body blanks pursue them and make it to the cabin just as the hoard descends. Allison activates the bomb and the town is once again safe.

But that doesn't mean everything's back to normal. Holly, whose consciousness operates similarly to a computer mainframe, has had her hard drive rebooted, and doesn't remember anything after the first moment she arrived in Eureka - including her love for Fargo. And as Allison and Jack consider moving somewhere safer, Shaw arrives and relates shocking news: in light of this most recent security breach, the Secretary of Defense has decided to shut down Eureka. All citizens and employees must begin dismantling their research immediately. 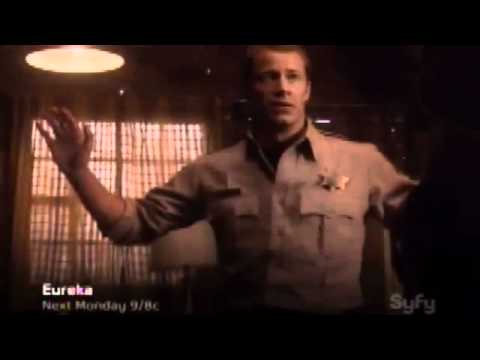