Major William Shaw from the DOD is in town to install a new security system, PANOP. Lupo, a former soldier of his, convinces him to skip the observatory, since that is where the memorial service for Holly Marten will be, and, out of concern for Fargo, Jo wants everything to go perfectly. Fargo, however, seems distracted - could it be that he can't wait to get back to his girlfriend in her matrix setting?

After the service, Jack agrees to help Henry with some testing of Grace's Z-wave theories - Z-waves being the pesky things that caused all the body switching not long ago - tempted by the thought that manipulating the Z-waves could make him telekinetic.

Shaw is also there to retrieve anything associated with the matrix experiment, including the hard drive where Holly's consciousness rests. Fargo and Zane try to stop Shaw from taking this one device, but they can't tell him why, since that would put Holly in the position of a lab rat. They have to try to get her out secretly. Jo is furious when she finds out, but Allison tells Fargo of a way that he may be able to circumvent PANOP and download Holly. PANOP is up and running - Shaw shows Jo his handiwork, but at that moment, the surveillance screen goes snowy and - is that a hand reaching through the ether? Fargo uses this outage to download Holly, but disembodied voices echo through the room, and all the lights blow. He doesn't have time to download her. PANOP is back online, and Fargo is arrested and informed that Holly's hard drive has been wiped clean.

Carter, who thought his brain's Z-waves were controlling a giant robot arm earlier, wonders if this and the other haunted computer incidents mean that Holly is in the GD mainframe, trying to escape the DOD blitz. When Carter and Henry visit the observatory and the laser there moves on its own, spelling out "HELP ME" in fire and ash, the clear answer is "YES." The DOD is starting a sweep for any malware in the mainframe, so Henry builds a device called a memory lattice as fast as he can. It's not fast enough, however, for the malware purge comes through and makes the laser explode, melting the memory lattice.

Zane uses the explosion as an excuse to have the PANOP surveillance system removed from Eureka - it's far too close to what was used in virtual Eureka for anyone's comfort - and get a raise for his girlfriend while he's doing it.

Fargo is crushed that he wasn't able to save Holly - until Henry informs him that he was able to piece Holly and the memory lattice back together. She'll be safe with SARAH, out of the reach of the DOD. She's not the same as she was before, but she's still there. 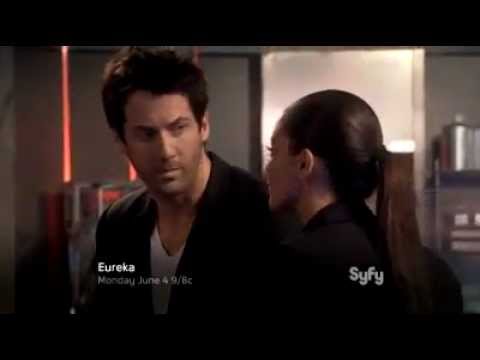