Nothing really happened in the Eurkea matrix, honest! But Carter and Jo are having a tough time convincing Allison and Zane - as well as themselves. But Fargo knows they're wrong. Holly Marten died in there. A glitch in the mainframe is responsible and he wants it destroyed - but Zane isn't done experimenting with it yet.

Allison wants them all to put the jealousy, suspicion and revenge aside to play nice since DOD assessor Warren Hughes is coming to evaluate team members' psychological readiness to return to work. Everything must run smoothly. Their jobs are at stake.

But this is Eureka. Strange things start to happen as the matter relocator goes haywire and Martha the attack drone goes mad. But that's nothing as Carter starts body-swapping with various team members during their evaluations, winding up in compromising positions with the wrong people, hearing confessions he doesn't want to hear. And Carter's neural transfers take their toll: the disruptive secrets turn into something far more serious and his life hangs by a thread. Grace and Henry work frantically to find the cause of the transfers, and Carter himself must take a hand in saving his own life.

At the end of the day, Carter gets honest with Allison about how he really feels, taking everyone by surprise. And not everyone is happy about it. 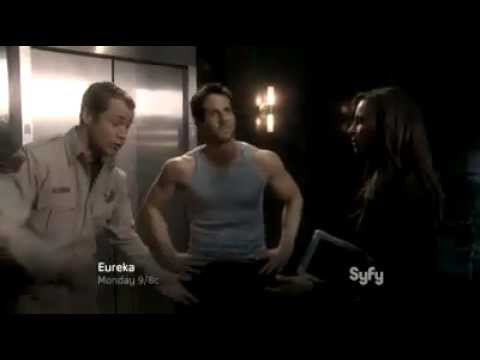