Carter's hunch that Senator Wen is involved in the abduction of the Astraeus and her crew is confirmed when, who should appear in his office but the mad genius herself, Beverly Barlowe. She convinces Carter and Jo to take her to Henry's garage, where she explains that the crew is on a ship, a mobile research unit, where their minds are constrained in a virtual Eureka, four years into the future.

The only way to find the location of the lab will be to jack someone into the program to replace one of the non-player characters, or NPCs, and blow up the Astraeus, creating a spike in the computer's heat signature. They can trace the spike to the physical location of the lab, but whoever enters the program will have to warn all of the crew without tipping off the NPCs.

With his skill at blowing things up, it's decided that Jack is the best candidate to go, so he issues a final warning not to let Beverly get away, and slides into the virtual world, replacing his NPC, landing just as Zane's avatar takes a swing at him with a big stick. It seems Zane had just figured out the construct of his world and knew that the virtual Carter was a threat, but the real Carter is able to explain who he is, and why he's there. Zane goes for Grace's help, while Carter seeks out Allison.

Fargo, who decided to chase after Holly after receiving a break-up memo from her saying that she was moving to DC, finds that he is unable to leave the town, so when he meets up with the others, everyone's on the same page. They're all set to blow up the Astraeus, but when Grace heads to Henry's garage to grab the remote detonator, he knows something's up and won't let her go. She's not able to meet up in time for the detonation, so Carter has to flip the switch manually.

He barely gets out of the ship before it blows, but when it does, everything goes haywire. The entire program begins to de-rez, and if it does so completely, all of the humans in the program could die. They can't wait and see if the rescue team will get there in time, so Zane undergoes the same kind of electric shock that almost booted him out of the program when he was shot by the flying security robots. The shock is enough to bring him to consciousness in the real world, just as Jo and her team board the mobile lab. Together, they incapacitate the hijackers and get the crew out, but Jack is still stuck in the program.

As the virtual Eureka literally crumbles around him, Jack is at the mercy of Beverly, who has just been discovered by Wen and several soldiers. Wen orders her and Henry to cease, but Henry grabs a sonic weapon from a soldier's belt, tells Beverly to duck, and, with the touch of a button, incapacitates everyone but her. She manages to eject Carter safely, but this also spells her escape.

Once everyone's back in the real world, they all try to readjust - an especially hard task for Fargo, who is mourning the death of Holly. Carter tries to comfort him, but it will take some time.

And time is all Senator Wen has - Beverly has trapped her in a virtual prison by putting her in the same program the crew was in. Wen has no way out, ever. 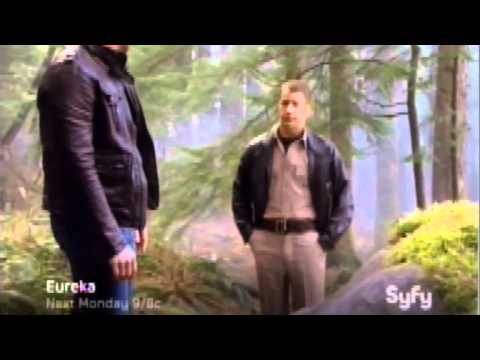