In honor of the Astreus launch, Eureka is expecting a visit from POTUS, himself, but when a supercharged beam of light slices through the Presidential convoy, security goes to red alert. Carter and Jo use digital imaging to find that the source of the beam is an energy-gathering device designed by a hippie outlier named Dr. Plotkin. But Plotkin insists that there's no way his rods, designed to harness energy to be used as an alternative to fossil fuels, could've created that beam.

Still, Jo and Carter enlist Plotkin to show them to every rod in Eureka and turn them off, one by one. They head to Cafe Diem, but their lunch is cut short when a ball of energy materializes and eats the cafe for lunch. Carter and Jo evacuate everyone just in time, then find Henry and Allison to learn that what they witnessed was a black hole. They can't figure out why it would've stabilized until Henry remembers the ionic charge that was released into Eureka's atmosphere when one of the power sources for the Astreus malfunctioned. The combination of the ionic charge and the full-spectrum energy rods creates the perfect atmosphere for black holes to stabilize, and now a massive one is forming, threatening to spaghettify the whole town!

Carter finds a way to make a hazard into a blessing: the rods, which permitted the holes to form in the first place, can overload the holes and cause them to implode. He gets as close to the black hole as he dares, then attaches a rod to a rocket and launches it into the hole. He is nearly sucked into the hole, but just as the singularity gains strength, the rod does its work the hole implodes.

Carter is grateful to return to GD and see the face of his beloved Allison, who is preparing all of the star voyagers for their trip to Titan. Fargo and Holly have just declared their love for each other, and are excited to be making such a momentous trip together. Jo and Zane share a rare moment of unguarded intimacy as Jo bids Zane farewell, but Zane senses a deeper meaning in her goodbye. Though she doesn't share this with Zane, Jo realizes that, for her own good, she needs to leave Eureka' it's just not home anymore. Carter tries to persuade her to stay, but her mind is made up, and she departs.

With everyone secured from the FTL jump, Allison performs the final security measures and prepares to leave the ship. But something has gone wrong: the ship begins to launch with Allison still aboard. Carter desperately attempts to stall the Astreus by breaking all of its cooling tubes, but its launch procedure continues - someone is controlling the ship from outside Eureka! Allison is trapped on the craft, and she'll only survive if she can make it to the jump seat before takeoff.

As the ship rumbles to a start and disappears, Carter looks on helplessly, with no way of knowing if Allison survived or not. 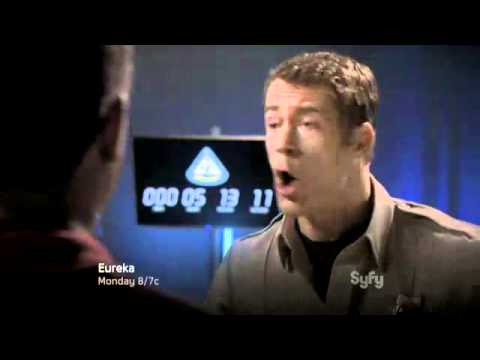