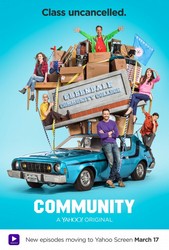 Duncan screens YouTube clips for his anthropology class. "Mountain Lion Eat Leg" the original and the auto-tune remix both get big laughs, and soon the class discusses other viral videos like "Car Crash Camel Toe" and "Ski Lift Ninja Crotch Rip." Shirley suggests looking up "God," but her religious ideals are undermined by the results: "God of Farts" is the most popular search result. Shirley can't quite understand why there were nine people at her church last night, yet 17 million people have watched the "God of Farts" video.

Shirley asks Abed if he'd like to help her make a Christian YouTube viral video, but he objects not because he's Muslim, but because he thinks of himself as a real filmmaker. Pierce attempts to fit in with elderly thug Leonard and his band of cronies, but every time Pierce looks the least bit cool (i.e. referencing "You Tune"), Britta comes in and makes him look like a mama's boy.

After reading the New Testament, Abed tells Shirley that he's interested in shooting the Christian YouTube video after all. Shirley's excited but soon realizes Abed's take isn't exactly what she had in mind. His idea is to tell the story of Jesus from the perspective of a filmmaker exploring the life of Jesus. Shirley rejects the meta, post-modern, highly narcissistic pitch and walks off. Leonard and his crew exert their bad influence over Pierce, including him in a drunken game of poker. When Dean Pelton enters and scolds the group, Pierce thinks fast, pretending poker helps with his memory. When a guilty Dean Pelton exits, Leonard finally approves of Pierce and his scheming ways.

Shirley directs her YouTube video featuring Britta and Troy, but neither actor feels particularly inspired by the scripture. Britta flubs her lines and Troy struggles to make Christian rap "beatitudes" sound cool. Outside, Abed's film loudly interrupts Shirley's shoot. Dressed as Jesus, Abed proclaims, "The Earth shall know my power." To Shirley's dismay, Britta and Troy abandon her video to watch Abed's weird take. Shirley looks on in horror as Abed's post-modern take on the New Testament ("The story of the story is the story.") captures the school's attention.

In the cafeteria, Shirley yells at Abed for claiming to be Jesus. Abed and his schoolmates, however, are totally taken by the "movie within a movie" premise, and accuse Shirley of acting like a Pharisee. Meanwhile, Pierce's rebelliousness is getting out of hand. He's late to class, smokes cigars, and everyone knows it's because he's hanging out with the hipsters (the elderly gang with hip replacements). Jeff's paternal side kicks in as he warns Pierce not to hang out with bad boy Leonard, but Pierce won't take anyone's advice.

Leonard peer pressures Pierce to go on a joy ride in Dean Pelton's Prius. If Pierce gets caught, Leonard suggests he just pretend he's old and disoriented. Meanwhile, Shirley gets Dean Pelton to shut down Abed's movie, citing a school rule that forbids using school property to make religious films. But when Abed explains that all movies are religious in nature after all, what are "The Matrix" and "Robocop" if not stories of death and resurrection? Dean Pelton allows the shoot to continue.

Pierce and the hipsters drive off in Dean Pelton's Prius with Richard at the wheel. When Richard realizes he can't drive, he manages to swerve into a tree. The hipsters abandon Richard but Pierce stays by his side. Abed watches a cut of his movie and realizes it's a piece of crap. He prays to God, asking Him to somehow get rid of the career-ending, overly hyped, self-indulgent film. Unfortunately God doesn't answer Abed's prayers, but Shirley's heard the whole thing.

In the cafeteria, Abed sits at a table set up like the Last Supper. Suddenly Shirley enters with a baseball bat and maniacally smashes the video camera and footage, thereby ruining Abed's film. Thinking his prayers have been answered, Abed announces, "God is great." Meanwhile Jeff picks up Pierce from the office. Jeff is clearly upset with Pierce's bad behavior and tells him to wait in the car. Before Jeff leaves the office he adds Britta as one of Pierce's emergency contacts.

Abed thanks Shirley for answering his prayers by destroying his film. Still annoyed, Shirley ignores Abed. Suddenly Duncan screens the Christian YouTube video and Shirley realizes it's her version with Troy and Britta! Abed finished the clip for her. Shirley and Abed make amends as Troy raps about Jesus.