Bonnie Rotten confirms she did file for divorce but then called it off after one day and has since been 'back home' because she didn't find any of his text messages mentioning sex with other women.

AceShowbiz - Jesse James' wife has had a change of heart about ending her marriage to her husband. Bonnie Rotten, who is currently pregnant with the motorcycle enthusiast's child, filed for divorce from him following her cheating allegations against him only to call it off after one day.

In a lengthy statement posted on her Instagram page on Monday, December 5, Bonnie confirmed that she did file for divorce, but said, "the next day I filed a non suit to stop the divorce." She explained, "I love Jesse so much and was very hurt by what I saw when I went through his phone," but she went "back home" to James because she had not discovered any text messages mentioning sex.

"That's why I am here working out the marriage that I believe in," the model reasoned. "There are things in the world with much more importance than our lives." She claimed that her accusations were "blown out of proportion to a degree that it didn't need to go."

"I would like to have peace in this time as I work on my relationship with my husband. There's nothing more to it," she added, before blaming the press for running a story based on "trash gossip" that she had posted herself.

"The media finds it necessary to report on trash gossip rather than actual news that is important to the American public. We have so many important things to worry about, and they shouldn't be wasting resources on us," so she criticized the media.

"Thankfully everything is back to status quo over here," the model assured of their relationship status. "I would appreciate an end to all of this." She additionally asked in the since-deleted post for peace so she could "focus on having a healthy pregnancy." 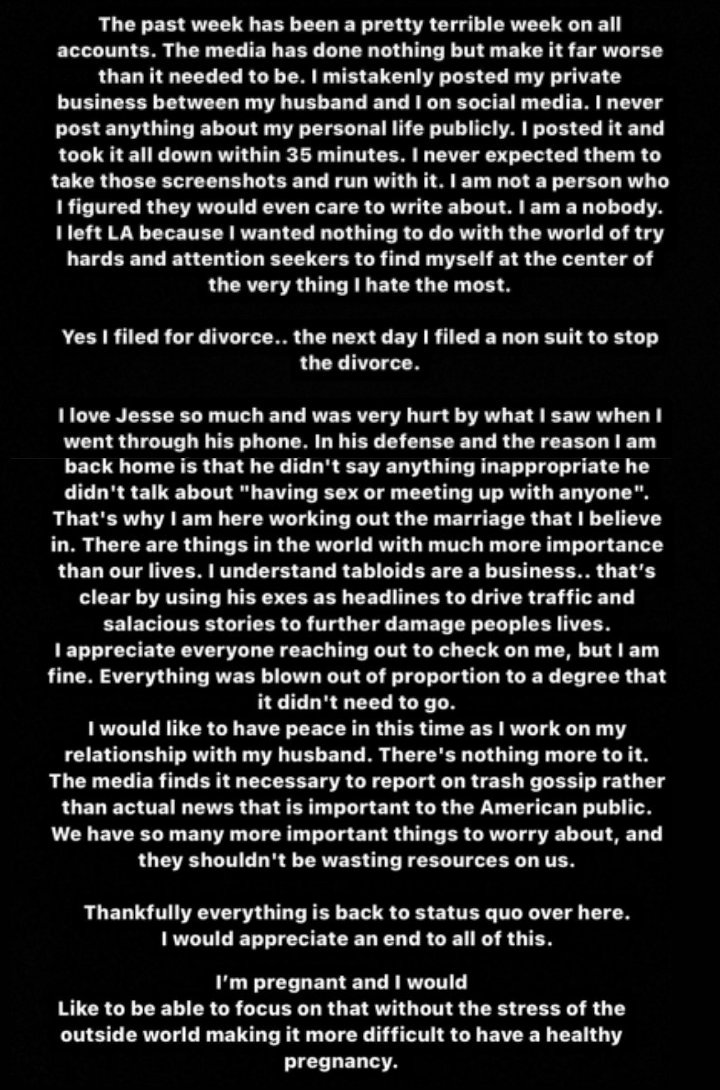 Jesse James' fiancee Bonnie Rotten announced she's back together with him.

Bonnie first ranted about Jesse on Instagram in late November. Posting a sonogram photo, she fumed, "Jesse is busy trying to f**k other women while I'm pregnant." She went on claiming, "I'm 10 weeks pregnant I had to leave the house because we got into it the other night. He blocked me on everything. I see his page. He's following his ex and a bunch of girls. I'm his pregnant wife and chooses to act like this. THAT'S NOT A MAN."

In another post, Bonnie lamented, "I'm so hurt by everything he has done to me. He doesn't give a f**k about anyone but himself he's a truly disgusting human being." She added, "I do not like putting this on social media but it's the only way he will feel anything is if everyone knows WHAT HE TRULY IS."

Jesse, however, denied the cheating accusations. He apologized to her, "Baby I didn't cheat on you I swear!! I'm sorry we got into a fight. I'm sorry I called you a r------ when we were fighting. I know that just made you more mad, and didn't do anything to make the situation better. It was out of line and childish and immature. I'm sorry I did that."