During his appearance on conspiracy theorist Alex Jones' podcast 'Infowars', the 'Donda' artist also talks about his ex-wife Kim Kardashian and asks her to come home.

AceShowbiz - Kanye West has "love" for Hitler. The Yeezy designer made the declaration while wearing a black fabric mask that covered his entire face during a Thursday morning, December 1, appearance on conspiracy theorist Alex Jones' podcast "Infowars".

"I see good things about Hitler... every human being has something of value that they brought to the table, especially Hitler," the 45-year-old rapper said. Ye, who has been dumped by brands including GAP, Adidas and Balenciaga following a series of anti-Semitic outbursts, later added, "I do love Hitler, I do love the Zionists - I love everyone."

When Alex, ordered by a court in November to pay more than $1.4 billion in damages to people who suffered from his false claim the Sandy Hook school shooting was a hoax, told Kanye, "You're not Hitler, you're not a Nazi, so you don’t deserve to be demonised."

But the rapper brushed off his comments with more remarks about Jews and Hitler, adding, "The Jews... I love everyone, and the Jewish people are not going to tell me, 'You can love us and you can love what we are doing to you with the contracts, and you can love what we are pushing with the pornography', but this guy that invented highways, invented the very microphone that I use as a musician, you can't say out loud that this person ever did anything good and I am done with that. I am done with the classifications. Every human being has something of value that they brought to the table, especially Hitler."

When Alex added Kanye had a "Hitler fetish" and told him that he did not really like Nazis or Hitler, it prompted Kanye to say, "I like Hitler... they (the Nazis) did good things too, we’ve got to stop dissing the Nazis all the time... the Jewish media has made us feel like the Nazis and Hitler have never offered anything of value to the world."

Kanye also brought out a net and a bottle of Yoohoo chocolate milk in an apparent attempt to mock Israeli Prime Minister-elect Benjamin Netanyahu. When Alex encouraged Kanye to remove his mask and tried to calm him down by asking him to talk about the name of his website, Kanye exclaimed, "My website is the Bible!"

The rapper also spoke of his ex-wife Kim Kardashian, 42, saying about her sex tape with rapper Ray J and her recent relationship with comic Pete Davidson, "She was pushed into the sex tape, she was pushed into saying she had sex with Pete Davidson in front of a fireplace. Hulu doesn't love you, Kim. Disney does not love you, Kim. Come home, Kim. Come home to Christ. Go to God. Go to Jesus. Go marry Tom Brady, but get married and use your platform as an influence to keep families together."

After the interview, a Twitter account for the Republicans on the House Judiciary Committee deleted a tweet that said, "Kanye. Elon. Trump". The message was posted in October, and the account had been under pressure to remove the tweet amid Kanye's anti-Semitism scandal. 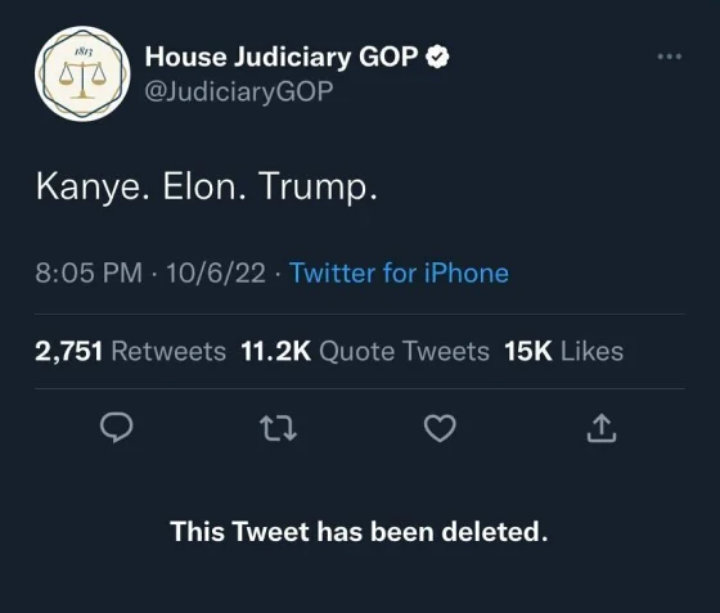 Among the celebrities who condemned Kanye's interview were actor Josh Gadd, who is Jewish. He said on Twitter, "It's not what Kanye West says that scares me. It's that he has 30 million followers who listen to his insanity on top of a cheerleader in the form of the current owner of this platform. No one who says 'I love Hitler' should be allowed any oxygen on any social platform (period)."