In a new Instagram post, the Bachelor Nation star asks fans to stop sending hate to his family after he and new girlfriend confirmed their whirlwind romance in 'Bachelor in Paradise' season 8 reunion.

AceShowbiz - Greg Grippo has broken his silence following his appearance in "Bachelor in Paradise" reunion. In a new Instagram post, he asked fans to stop sending hate to his family after he joined new girlfriend Victoria Fuller in the special episode.

"Send all the hate that you desire my way but please leave my mother and fam out of this," Greg wrote on Instagram on Thursday morning, November 24. "Enjoy your Thanksgiving." 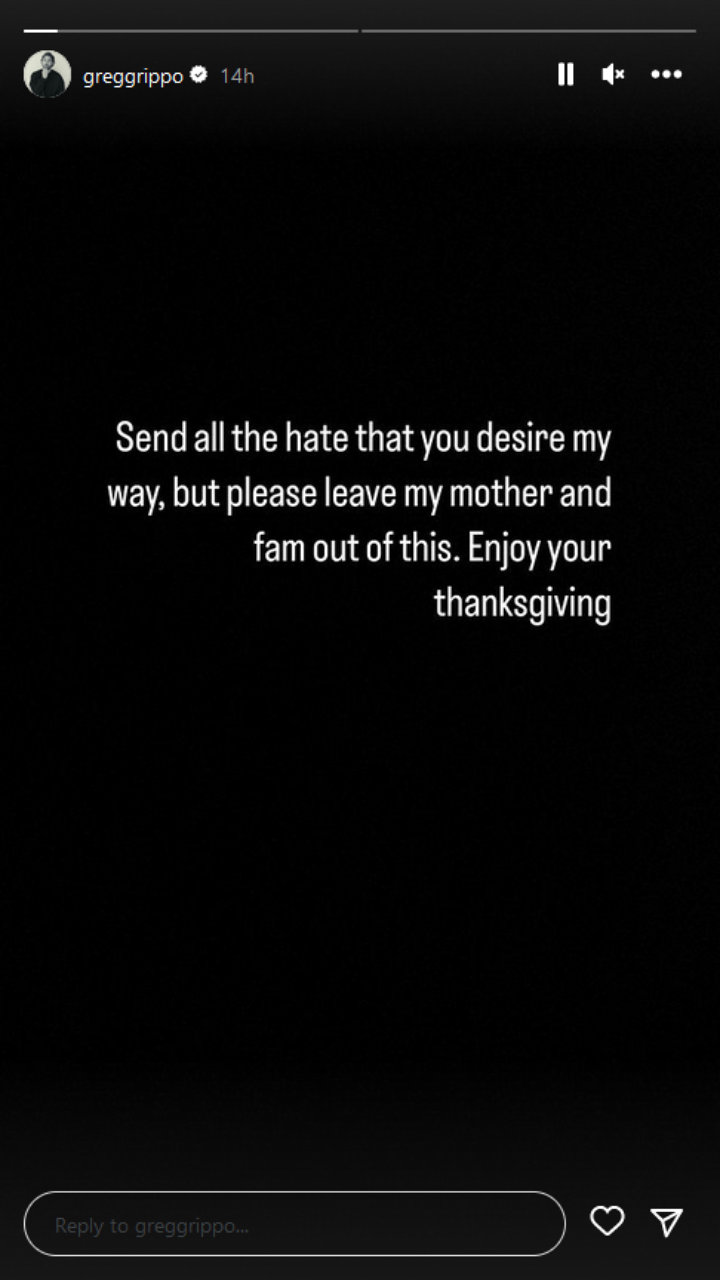 Greg's post arrived one day after Victoria confirmed her split from fiance Johnny DePhillipo. "When you get called a 'f**king c**t' in your relationship, it's time to move on," Victoria, who previously competed in Peter Weber's season of "The Bachelor", wrote on Instagram.

Greg and Victoria sent shock waves to fellow Bachelor Nation stars and fans when they confirmed their romance in "Bachelor in Paradise" season 8 reunion on Tuesday, November 22. In the reunion episode, footage of Victoria's romantic engagement to Johnny was played before Greg was brought to the stage.

The latter then explained that he and Victoria had been "friends for a while" before reconnecting "weeks after 'Paradise' " and went out "for a drink" in Rome, Italy. The new couple also showed off their matching tattoos. "It says 'ciao,' it's in Italian for 'hi,' " Greg said of their new inks, while the rest of the "BiP" cast looked visibly shocked.

Addressing the cheating allegations surrounding the pair, Greg said, "I get it's not the best look in the world." Victoria, meanwhile, added, "Everyone can hate us if they f**king want."

She claimed that she and Johnny called off their engagement less than one month after "Bachelor in Paradise" filming wrapped. "There was a possibility for us to potentially work toward something. Breakups are confusing, right? I mean we all know that. I'd be crazy to say that I cut off communication completely," she explained. "We ended our engagement three weeks after and then shortly after that we were completely done."

Johnny, however, said that they hadn't "officially" broken up until mid-September, adding that they were "in couples counseling before she went to Italy" the next month. Victoria, for her part, called their relationship toxic and accused Johnny of wanting "this narrative to play out so bad because you don't want to take accountability for what happened in our relationship."

Greg Grippo Addresses His 'The Bachelorette' Abrupt Exit: I Was 'Very Immature'