As many accuse the Los Angeles Lakers player of throwing Kyrie under the bus, LeBron shares another statement to clarify his stance on the Brooklyn Nets star.

AceShowbiz - LeBron James has seemingly responded to the backlash that he's got after he weighed in on Kyrie Irving's anti-Semitic scandal. As many accused the Los Angeles Lakers player of throwing Kyrie under the bus, LeBron shared another statement to clarify his stance on the Brooklyn Nets star.

"I told you guys that I don't believe in sharing hurtful information," LeBron tweeted on Thursday, November 10. "And I'll continue to be that way but Kyrie apologized and he should be able to play. That's what I think. It's that simple."

Criticizing Nets' list of requirements for Kyrie's return, LeBron added, "Help him learn- but he should be playing. What he's asked to do to get back on the floor I think is excessive IMO. He's not the person that's being portrayed of him. Anyways back to my rehab session." 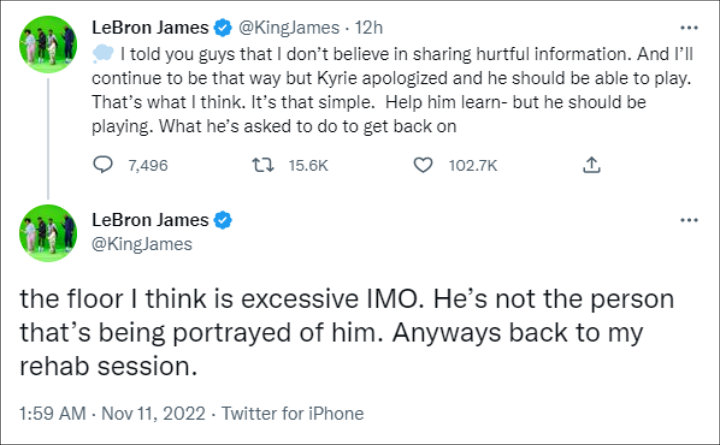 Prior to this, Nets outlined six conditions for Kyrie to be able to be back in the team. One is apologizing for linking to the movie. Kyrie is also required complete the anti-hate causes the Nets first mentioned on November 2. It included a $500,000 donation to the Anti-Defamation League, but the organization could not accept the money while the athlete refused to apologize.

Kyrie also has to complete sensitivity training in addition to completing anti-Semitic and hate training, both of which are created by the Nets. The fifth condition is for Kyrie to meet with Jewish community leaders in Brooklyn. As for the last condition, Kyrie has to meet with Nets owner Joe Tsai to demonstrate what would be "the lessons learned and that the gravity of the harm caused is understood."

In his initial comments, LeBron opted to take a diplomatic approach. "I don't condone any hate to any kind, to any race… You guys know where I stand," he said at the time. "He apologized, but he caused some harm. I think it's unfortunate. I don't stand on the position to harm people when it comes to your voice or you platform."

Kyrie angered people after posting a link to the Amazon page for the 2018 film "Hebrews to Negroes: Wake Up Black America" last week. The film is based on a 2015 book of the same name, which has been described as "venomously anti-Semitic." It also quotes Adolf Hitler to convince the audience about the existence of a Jewish plan for world domination.

After refusing to apologize for his post, Kyrie eventually posted an apology on Instagram. "While doing research on YHWH, I posted a Documentary that contained some false anti-Semitic statements, narratives, and language that were untrue and offensive to the Jewish Race/Religion, and I take full accountability and responsibility for my actions. I am grateful to have a big platform to share knowledge and I want to move forward by having an open dialogue to learn more and grow from this," he said.

"I had no intentions to disrespect any Jewish cultural history regarding the Holocaust or perpetuate any hate. I am learning from this unfortunate event and hope we can find understanding between us all. I am no different than any other human being. I am a seeker of truth and knowledge, and I know who I Am," he concluded.

LeBron James Being Held Back From Confronting Heckler in Viral Video