Khloe Kardashian 'Proud' of Herself After Cancer Scare

After undergoing an operation to have a small bump removed from her cheek, the 'Kardashians' star has now provided some insight on the healing process on social media.

AceShowbiz - Khloe Kardashian's surgical scar is healing "wonderfully." After undergoing an operation to have a small bump removed from her cheek, "The Kardashians" star has now provided some insight on the healing process.

A Twitter follower said, "Koko, so proud of you for taking care of your skin and rocking your band-aid at all these high-fashion events. Do you >know when you get to take it off?"

The 38-year-old star then replied, "Trust me it's not easy lol but it will help my scar not stretch out any bigger than it has to be. Right now it's healing so wonderfully. I do laser treatments on it and it's healing so so well. They want me to wear it for six months but I'm not sure I will go that long. (sic)"

Khloe also revealed that she feels "proud" of herself. She said, "It's already been a couple months and I'm really proud that I've been this diligent with it." 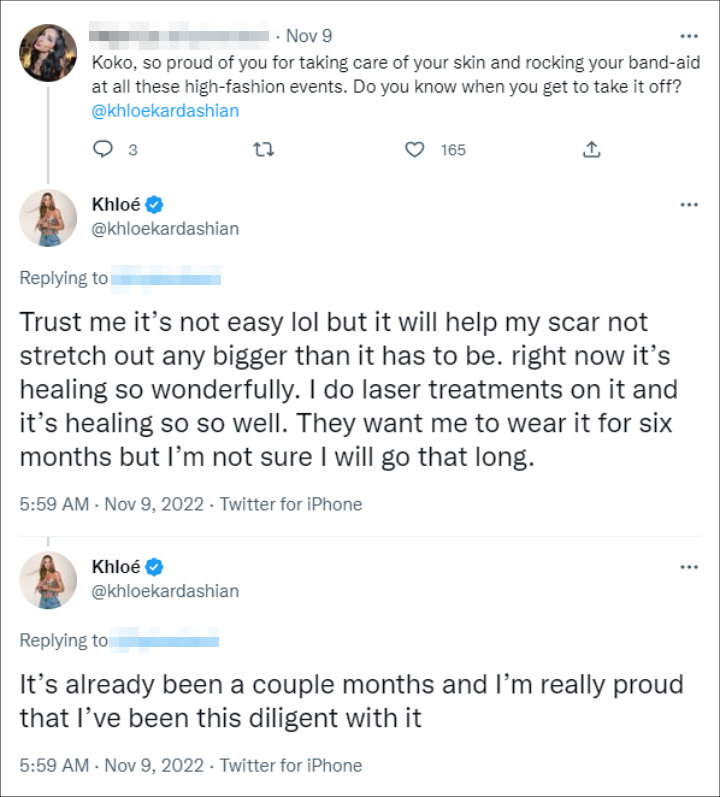 Khloe previously took to social media to discuss the operation and her cancer scare. The reality star wrote on her Instagram Story, "I have seen numerous stories going around about the ever-evolving bandage on my face, with some of you wondering why I've been wearing one for the past few weeks."

"After noticing a small bump on my face and assuming it was something as minor as a zit, I decided to get it biopsied 7 months after realizing it was not budging," she said.

"Dermatologist Dr Tess Mauricio (@drtessmauricio) examined it, and a second biopsy was ran by Dr. Daniel Behroozan (@drdanbehroozan) because what they were both seeing was incredibly rare for someone my age," she explained.

She went on to recall, "A few days later I was told I need to have an immediate operation to remove a tumor from my face. I called none other than Dr. Garth Fischer, a dear friend of my families and one of the best surgeons in Beverly Hills who I knew would take incredible care of my face. (sic)"

50 Cent Reignites Feud With 'Grandma' Madonna: 'Like a Virgin at 64'