According to a Ukrainian spy head, the Russian president has three body doubles who have undergone plastic surgeries and the real Putin may not exist anymore.

AceShowbiz - Vladimir Putin allegedly has "three body doubles" who've had plastic surgery. Major General Kyrylo Budanov - who serves as Ukraine's head of military intelligence - claims that the Russian top politician, 70, who launched an ongoing military invasion of neighbouring country Ukraine in February, uses body doubles in an attempt to cover up his loss of control in the Kremlin.

"We know specifically about three people that keep appearing, but how many there are, we don't know. They all had plastic surgery to look alike," he told The Mail on Sunday.

The Ukrainian spy even added the real Putin may no longer exist, "The big question is whether the real Putin still exists? The one thing that gives [these body doubles] away is their height. It's visible in videos and pictures. Also gesturing, body language and earlobes, since they are unique for every person."

The outlet went on to claim that the spy predicted that "change is inevitable" and hopes that UK government continues to support the wartorn country in both a "political" and "economical" sense.

He said, "We are very grateful for the assistance your government is providing. We hope the UK will not only continue political, economic and military support but increase it. We are in acute need of air defense systems.

The claims come just a week after it was alleged by Kyiv Post correspondent Jason Jay Smart claimed that Vladimir could be showing signs of having had intravenous chemotherapy to treat cancer and pointed out marks on his hands. 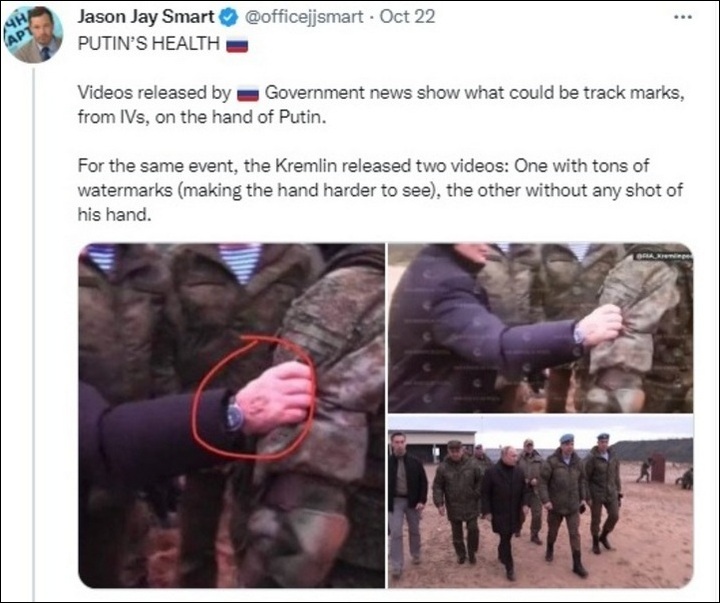 Alongside screenshots of Vladimir's appearance on Russian news, he tweeted, "Videos released by Russian government Government news show what could be track marks, from IVs, on the hand of Putin. For the same event, the Kremlin released two videos, One with tons of watermarks (making the hand harder to see), the other without any shot of his hand."