Making use of his social media platform, the 'Industry Baby' hitmaker slams the Internet personality for saying that drill artists are the real problem, not him.

AceShowbiz - Lil Nas X stands up for himself. The "MONTERO (Call Me By Your Name)" hitmaker has spoken out after he was named among "insanities in the world" by controversial Internet personality Andrew Tate.

Turning to his Twitter account on Saturday, October 8, the "Industry Baby" rapper wrote, "andrew tate please stop mentioning me!" The 23-year-old hip-hop star, who came out as gay in 2019, added, "i am never gonna let u smash loser!" 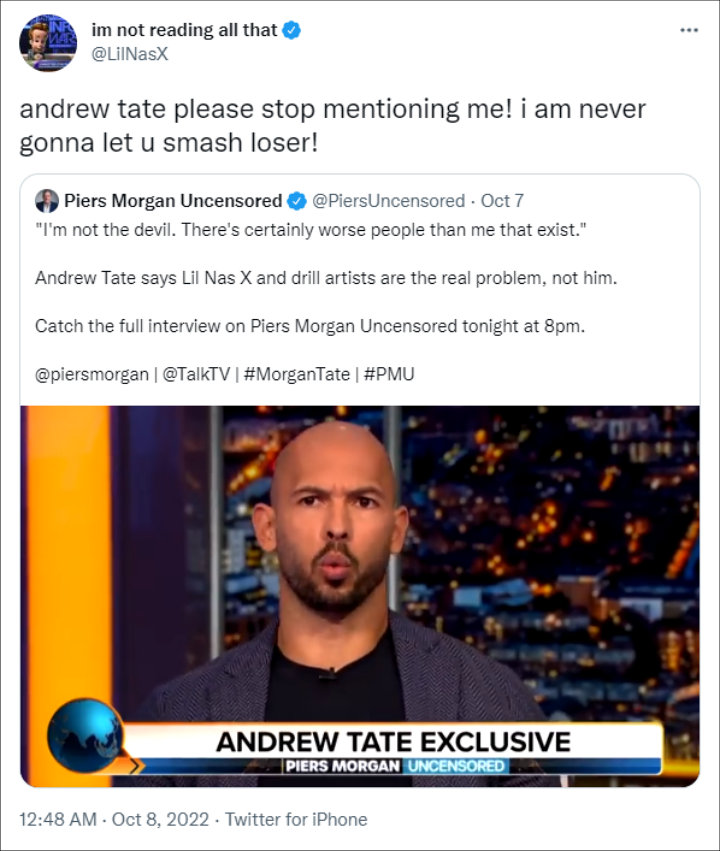 Nas X's response came after Tate called him out when making an appearance on "Piers Morgan Uncensored" following his band from Twitter, TikTok, YouTube, Facebook and Instagram. During his interview, Tate doubled down on his takes on what he describes as "traditional masculinity" and decried being labeled as a bad influence. He then slammed Nas X in the process.

"You have Lil Nas X twerking on the devil in music videos which our children are digesting," Tate said referring to the music video for "MONTERO (Call Me By Your Name)". He added, "You have drill artists rapping about stabbing people to death in the middle of a knife crime epidemic. You have all these insanities in the world…but I'm not the devil. There are certainly worse people than me."

Elsewhere during the interview, Tate revealed that he specifically chose Morgan to interview him, as the host has also had his share of controversies over the years. "You've certainly been the subject of your own divided opinions in the world," the former kickboxer said. "There are people who'd say some of the things you say are dangerous or toxic, so I thought you'd be a good person to speak to about this."

Tate was banned on multiple social media platforms over his misogynist posts. In an email on August 19, Facebook and Instagram, which are under Meta Platforms Inc., stated that the season 17 star of U.K.'s version of "Big Brother" was removed for violating Meta policies "on dangerous organizations and individuals."

Also banning Tate from their platforms were Twitter and TikTok. Twitter banned the reality star after he tweeted in 2017 that women belong in the home and those rape victims "bear responsibility" for the attack.

Meanwhile, Tate was banned from TikTok after he violated its guidelines. "Misogyny is a hateful ideology that is not tolerated on TikTok," a TikTok spokesperson said of Tate, who is a vocal supporter of Donald Trump. "We've been removing violative videos and accounts for weeks, and we welcome the news that other platforms are also taking action against this individual."