Lately, the former TV talk show host has been sparking concerns among her fans over her well-being after showing odd behavior and making a 'crazy' marriage claim.

AceShowbiz - Wendy Williams is assuring her fans that she is doing just fine amid her mental and health issues. In a new social media post, the former TV talk show host clapped back at the naysayers who doubted her.

On Monday, August 19, the 58-year-old TV personality, who's known for her now-canceled eponymous talk show "The Wendy Williams Show", turned to Instagram to post a photo of her flashing her middle fingers in front of a table-built microphone. "To Anyone who doubts the [queen]," she wrote underneath the picture that also saw her sitting on a wood-made chair, instead of her iconic purple chair. 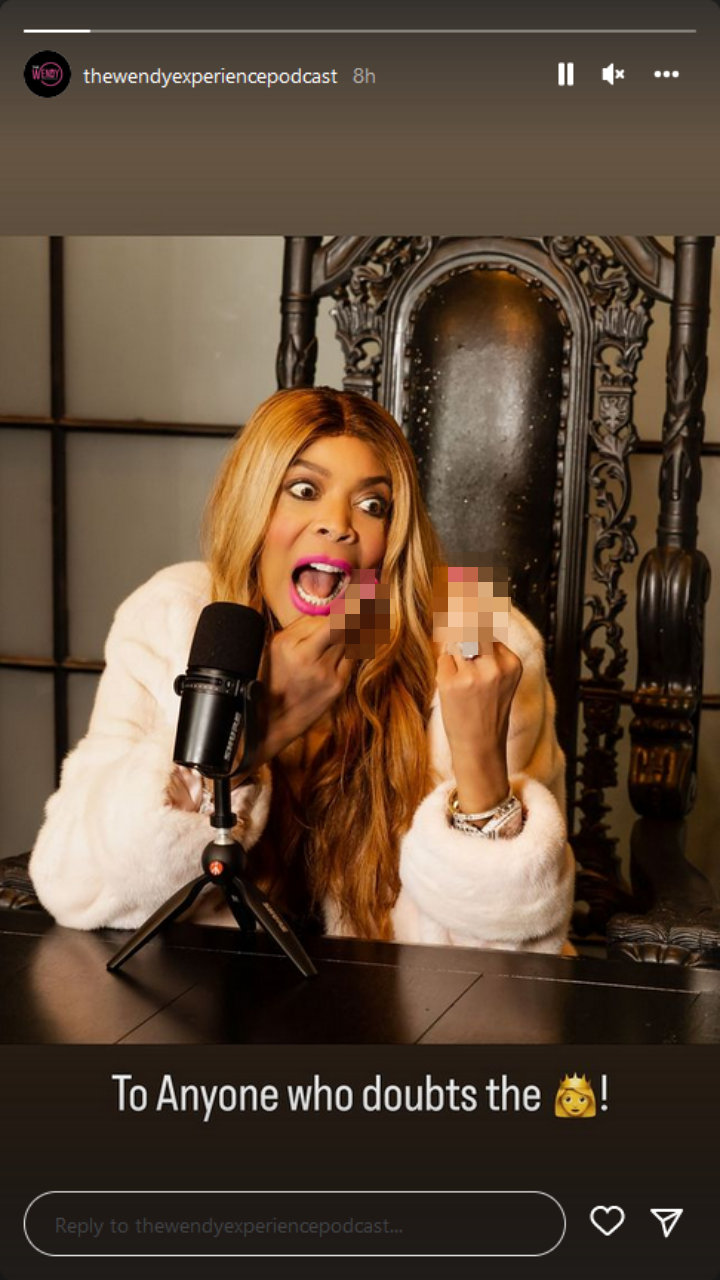 Wendy Williams flashed her middle fingers when slamming anyone who 'doubts' her.

Not stopping there, Wendy also teased her fans that her brand new podcast will be airing soon. "LOADING… #thewendyexperience #coming #soon #podcast #loading," she captioned an image of her looking gorgeous in a white baggy top.

Fans were quick to flood the comment section with their concerns, with one noting that "this production company is tied to Will Selby." The said person exclaimed, "Someone save Wendy!" Someone else wrote, "Fire the manager and marketing team. Everything feels cheap and that's not your style. Praying for a speedy recovery Wendy."

"They need to stop! STOP embarrassing this woman. She needs to work on her. People are all about the [money] they don't care about the person. Get Well Wendy you got fans that really care about you," a third pointed out. Another wrote, "Our queen is not well. Please God cover her with people who will assist in pulling her away from the evil," while a fifth warned Wendy to get better before starting new podcast journey as writing, "Wendy get well before you start any new ventures."

Meanwhile, others are excited about Wendy's podcast debut. "Can't wait for Wendy!!" one person penned with another noting that her "purple chair has leveled up to a THRONE!!" Someone said that Wendy is "looking great" and that he/she "can't wait for the queen to come back."

While Wendy, who claimed that she has gotten married to an NYPD cop named Henry earlier this month, looks pretty good in her latest social media posts, she has been sparking concern over her well-being lately. Last week, she was spotted looking disoriented when she stepped out to buy some cigarettes and a bottle of Ketel One vodka. At the time, she wore denim mini shorts, flaunting her frighteningly thin legs.

A separate source close to Wendy spilled that many of the gossip queen's troubles are "a direct result of untreated alcohol addiction." It's also said that Wendy's addiction "worsened during her stint in rehab for cocaine addiction in 2019 during her separation and divorce" from her second husband, Kevin Hunter.

Wendy has been facing a lot of troubles in 2022. Her talk show "The Wendy Williams Show" was canceled and replaced with Sherri Shepherd's show "Sherri" following her months-long absence due to her physical and mental health issues. She was also banned from accessing her Wells Fargo account because the company was worried she had been subjected to "financial exploitation, dementia, or undue influence."