Marvel Filmmakers Reach Out to 'Batgirl' Directors After Movie's Cancellation

Adil El Arbi posts a screenshot of an email he receives from Marvel head Kevin Feige, who shares a supportive message to the 'Batgirl' director after Warner Bros. axed his film.

AceShowbiz - Marvel Studios honcho Kevin Feige brushes aside competition with its biggest rival to show his support to "Batgirl" directors Billal Fallah and Adil Al Arbi following the devastating news of the movie's cancellation. The primary producer of the Marvel Cinematic Universe and other filmmakers have reached out to the two helmers after Warner Bros. announced the shocking decision.

On Friday, August 5, Al Arbi posted on his Instagram Story a screenshot of an email that he recently received from the producer. In the message, Feige wrote, "My friends I had to reach out and let you know we are all thinking about you both. Because of the wonderful news about the wedding (congrats!) and the disappointing news about Batgirl. Very proud of you guys for all the amazing work you do and particularly Ms. Marvel of course! Can't wait to see what is next for you. Hope to see you soon."

Al Arbi wrote over it, "thanks brother Kevin." In another Story, the "Batgirl" director expressed his gratitude for "all the messages of support all over the world" and gave specific shout-outs to "Baby Driver" helmer Edgar Wright and "Guardians of the Galaxy" director James Gunn for their "kind words and experience," which "[meant] a lot and [helped them] through this difficult period." 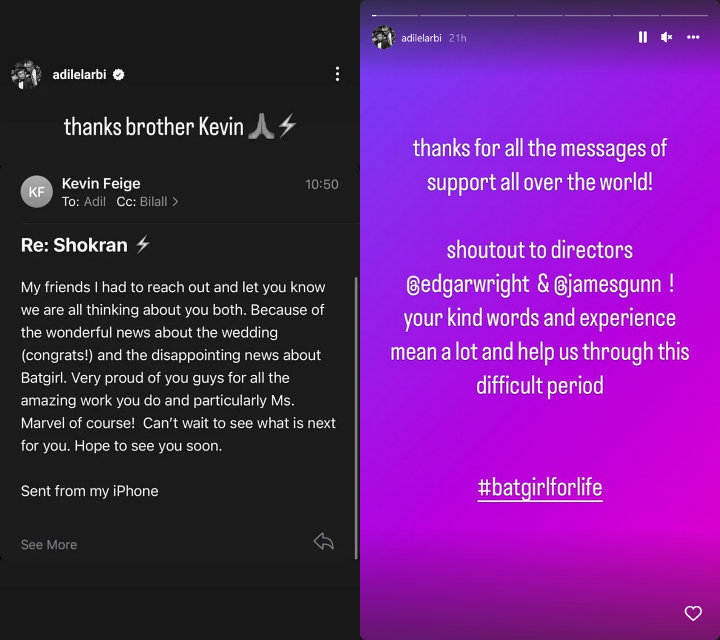 'Batgirl' director Adil El Arbi thanked everyone who reached out to him following his movie's cancellation.
See also...

Warner Bros. confirmed on Tuesday that it had decided to not release "Batgirl" and "Scoob! Holiday Haunt". A Warner Bros. spokesperson said in a statement, "The decision to not release 'Batgirl' reflects our leadership’s strategic shift as it relates to the DC universe and HBO Max." The statement continued to read, "Leslie Grace is an incredibly talented actor and this decision is not a reflection of her performance. We are incredibly grateful to the filmmakers of 'Batgirl' and 'Scoob! Holiday Haunt' and their respective casts and we hope to collaborate with everyone again in the near future."

Responding to the news, Fallah and Al Arbi said in a joint statement, "We are saddened and shocked by the news." They lamented, "We still can't believe it. As directors, it is critical that our work be shown to audiences, and while the film was far from finished, we wish that fans all over the world would have had the opportunity to see an embrace the final films themselves. Maybe one day they will insha/Allah."

The filmmakers praised everyone they worked with on the project. "Our amazing cast and crew did a tremendous job and worked so hard to bring Batgirl to life," they added. "We are forever grateful to have been part of that team. It was a dream to work with such fantastic actors like Michael Keaton, J.K. Simmons, Brendan Fraser, Jacob Scipio, Corey Johnson, Rebecca Front, and especially the great Leslie Grace, who portrayed Batgirl with so much passion, dedication, and humanity."

Grace, who portrayed Batgirl, took to her own Instagram account to share behind-the-scenes photos and videos from "Batgirl". Keeping a positive attitude, she penned, "On the heels of the recent news about our movie 'Batgirl,' I am proud of the love, hard work and intention all of our incredible cast and tireless crew put into this film over 7 months in Scotland. I feel blessed to have worked among absolute greats and forged relationships for a lifetime in the process!"

While it was initially reported that the decision was not driven by the quality of the movie, but due to the shift to focus on theatrical releases as opposed to straight-to-streaming debut, follow-up reports said that test screenings were received so poorly that the studio decided to shelve the nearly completed film.

'Batgirl' Film Axed by Warner Bros. Though Filming Has Completed