On her new song '29' that will be featured on her upcoming album 'Holy Fvck', the 'Skin on My Teeth' songstress sings about dating a 29-year-old guy when she's still a teen.

AceShowbiz - After years of amicable relationship with her ex Wilmer Valderrama, Demi Lovato has now hinted that things have turned sour between them. The 29-year-old singer has seemingly dissed the actor on her new song "29".

On the track that will be featured on Demi's upcoming new studio album "Holy Fvck", she appears to reference the "That's 70s Show" alum's age when they met. "Finally 29/ Funny, just like you were you at the time/ Thought it was a teenage dream/ Just a fantasy/ But was it yours or was it mine?" she sings.

In addition to repeating "17, 29" in the tune, the "Camp Rock" star mentions being "too young to drink wine." She continues singing, "Just five years of bleeders, student and a teacher/ Far from innocent/ What the f**k's consent?/ Numbers told you not to/ But that didn't stop you."

While Demi has not explained who the song is about, fans have been speculating that the former Disney Channel star is singing about her much older ex-boyfriend. "I am SHOOK. I wondered [how] she'd feel once she got to the age of him when they started dating," one fan reacted. Another commented, "I never knew they dated bc I wasn't on social media as a kid but wow this song is powerful glad she's calling him out."

Demi started dating Wilmer in 2010, when she was 18 years old. They had an on-and-off relationship until they split for good in 2016. The "NCIS: Naval Criminal Investigative Service" star remained supportive of her after their split, with the actor visiting her in the hospital after her 2018 accidental overdose.

Demi previously said that Wilmer wasn't interested in dating her until she was 18. "[When] I laid eyes on him for the first time, I was in hair and makeup and he came in and sat down and I was like 'I love this man' and 'I have to have him,' " she told Complex. "But I was only 17, so he was like, 'Get away from me.' "

"Then we became really good friends, and he was there for me through a number of situations and breakups and whatever," she continued. "After I turned 18, we began dating. I think it was love at first sight, and I don't really believe in that, but I believe that it happened."

Demi Lovato Elaborates Why She Goes Back to She/Her Pronouns 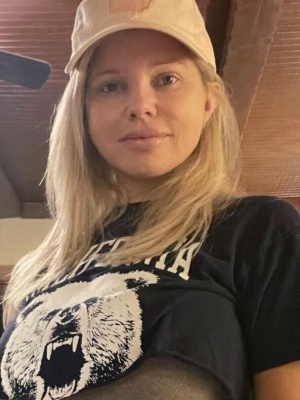