Latto Teases About Having a Baby With Her Mystery Boyfriend

While the 'Big Energy' raptress has not officially introduced her boo, she has been bragging a lot about the unnamed boyfriend as she claims that he would fly her on a private jet to get her 'back home to him faster.'

AceShowbiz - Latto (previously known as Mulatto) may remain mum on the identity of her boyfriend, but it doesn't mean she's keeping how he makes her feel to herself. Via a series of new tweets, the raptress has been gushing about her boyfriend, hinting that she will be having a baby with him sooner or later.

On Sunday, June 12, the Atlanta star took to Twitter to express how much she missed her man. "Get me home to my man nowwwww," she sweetly exclaimed. When a fan asked her, "you miss him already?" she wasn't shy to admit, "Girl I be dead crying when I have to leave lol we got separation anxiety reallll bad."

Latto went on bragging that her beau would fly her on a private jet to get her back home sooner after a show. "1 thing about it my man gone put me on a jet after my show to get me back home to him faster," so she claimed.

Another fan then jokingly asked Latto, "invite us to the wedding gurl." Apparently so sure that he's the one, the 23-year-old teased that she's planning to have a baby with her current boyfriend as she wrote back, "Ok. I'm just tryna see if I wanna have this baby before or after." 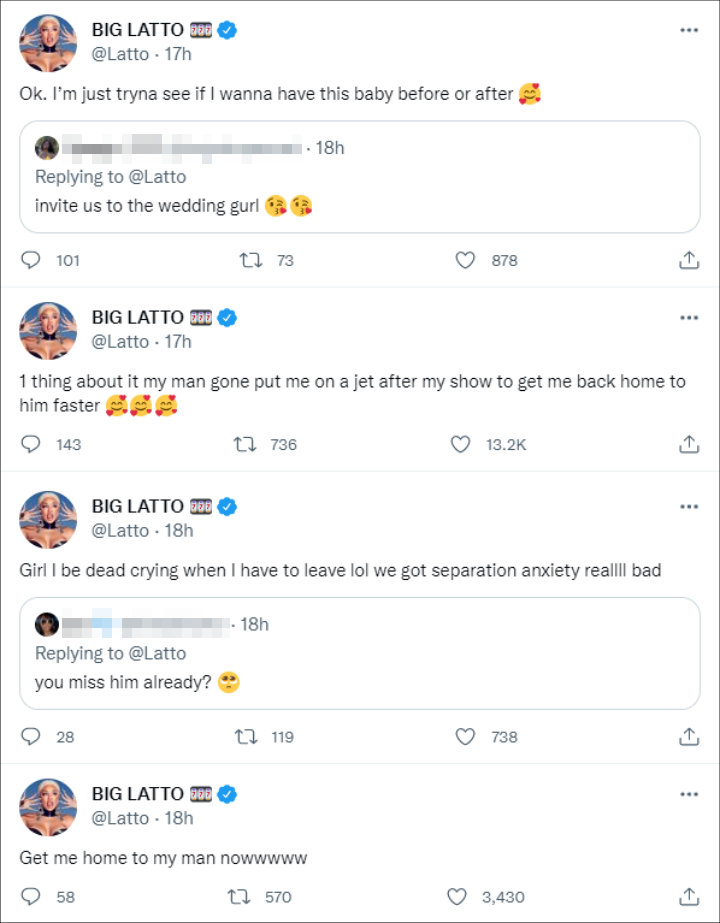 Latto bragged about her mystery boyfriend.

Latto has been dating the unnamed boyfriend privately for two years. Back in March, she gushed about how her boyfriend made her cry with his thoughtful support following the release of her album "777". "Everything falling in place for you. Nobody can't stop [you,]" her boyfriend wrote in a text exchange, which screenshot was shared by the "Big Energy" femcee. "My man got me crying in the hookah bar yall," she captioned it.

However, a naysayer mocked Latto's boyfriend, claiming that what he did was "literally the bare minimum." She quickly defended her man, listing the luxury gifts that her beau has apparently showered her with, "What's bare minimum? The Lamborghini he bought? The pink corvette? The pink Richard Mill? 1 of my 20 birkins? Aint nun bare minimum bout my love life babe. Not to mention I GET THE D**K TO MYSELF. But it's his emotional support that do it for me! U hating from outside the club."