While some people agree with him that having surgery before being fully developed is unnecessary, others think he's a hypocrite because he only likes a certain type of natural body.

AceShowbiz - After being involved with countless women, The Game appears to be thinking that he knows them better now. The Compton native isn't afraid to share his mind about young women who think about getting plastic surgery before being fully developed.

Taking to his Twitter account, the "Hate It or Love It" rhymer posted on Saturday, April 30, "Not knockin any woman doing what she wants to her body but…. To all the women with natural bodies contemplating surgery… waiting til that 'GROWN WOMAN WEIGHT' hit might be exactly what you prayed for. It hit different !!!" He accompanied the message with a GIF of a man grinning and tapping his temple. 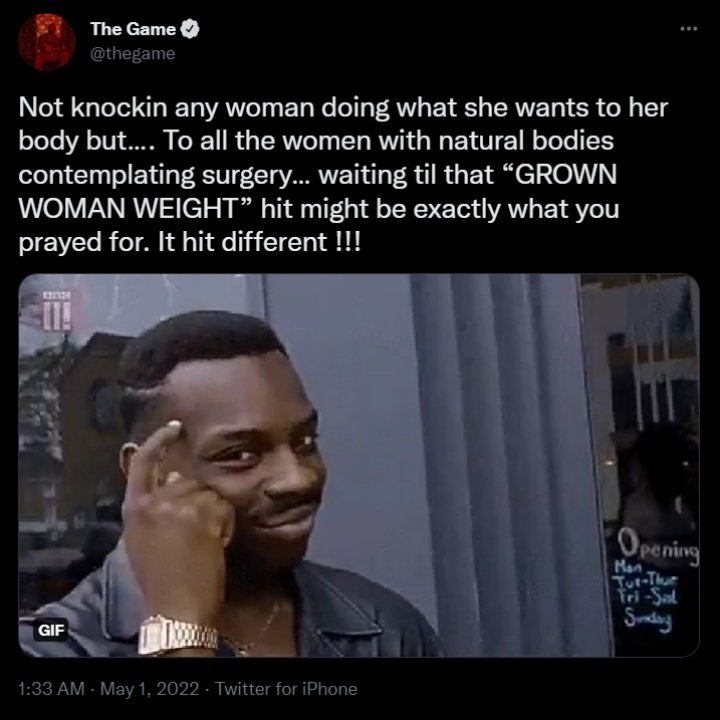 The Game shared advice to young women considering to get plastic surgery.

Some Twitter users agreed with him, with one commenting, "He's kind of right.." Another echoed The Game's advice, "He's right tho .. ladies give your body time to develop." A third said, "Tell them again the girls in the Doctors office can't hear u."

"You guys can get mad he's talking womens bodies but he's right," a fourth echoed, while another opined, "This is true for some women, but then again sometimes that weight don't be hitting the right places."

Some others, meanwhile, thought The Game was being a hypocrite because he only likes natural body if it's curvy. "They like natural body only if you are curvy and petite. Just shut up and let women do what they want," one claimed.

Another similarly said, "I wish yall would stop talking about surgery period. Y'all don't like natural bodies unless they're naturally fine. I can go on Twitter and search for 5 minutes before i see a man or even a woman shaming a body that's not 'acceptable'. Just give it a REST."

There were also those who slammed the Grammy Award-winning artist for telling women what to do with their bodies. "Always worried about what women doing," one critic said. Another wrote, "i know some mean well but y'all have to just stop policing womens bodies. Period." One other told the rapper to "stay out of women's business."

Saweetie Misses Her 'Old Boo' One Year After Quavo Split