Apparently catching wind of the backlash and memes over his comments from a 2018 interview about preferring to hang out with adults over kids growing up, the 'Karate Kid' star jumps to his own defense on Twitter.

AceShowbiz - Jaden Smith has responded after being clowned for mocking people his own age. The son of Will Smith and Jada Pinkett Smith has clapped back after he's trolled for his comments in an old interview about preferring to hang out with adults over kids growing up.

In a clip from the 2018 interview which resurfaced earlier this month, the 23-year-old said he would much rather be discussing politics or culture while kids didn't like to talk about the "political and economic state of the world."

"I am very happy that I spent my childhood with more adults than I did with kids my own age, because I was picking up more things from adults than I were [sic] from kids my own age," he said during an appearance on Big BoyTV. He went imitating the voice of a young person as saying, "Look at my phone! Selfie."

Assuring that he still enjoys things young people do, the rapper/actor noted, "Don't worry - I like to turn up. I like to flex. I like to play songs loud and jump in the crowd in Atlanta, but I'm always looking for that next thing." He added though, "I'm not satisfied at just a party."

Jaden's comments sparked numerous memes on social media, with one person posting screenshots from Travis Scott (II)'s apology video for the Astroworld tragedy and wrote, "Jaden Smith at the age of 12 when he got a Wii instead of the declaration of independence."

Jaden apparently has caught wind of the backlash because he has turned to Twitter to share his own meme. He posted an image of himself looking stoic and shared a hypothetical conversation with an imaginary friend. 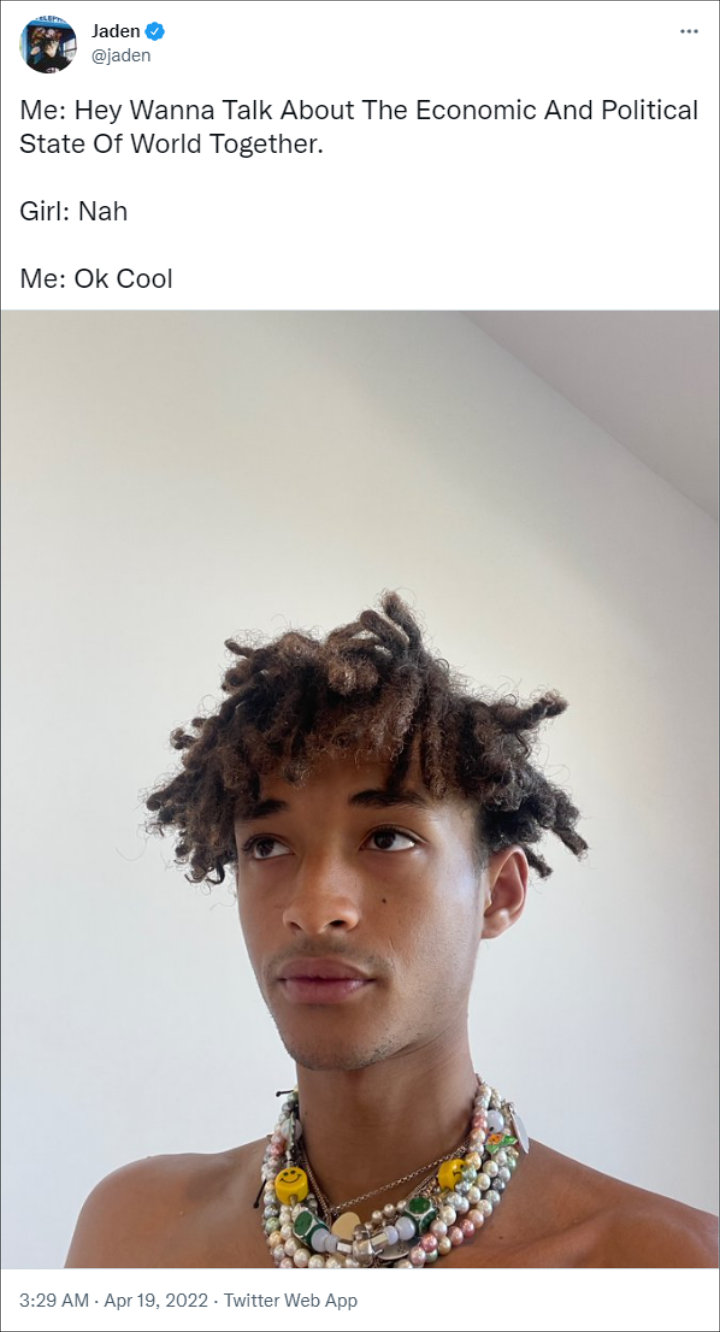 Jaden Smith responded to memes over his 2018 comments.

"Me: Hey Wanna Talk About The Economic And Political State Of World Together; Girl: Nah; Me: Ok Cool," he wrote in the caption of the Monday, April 18 post.