The country music artist-turned-Franklin police officer passed away at the age of 58 after suffering a heart attack at Williamson Medical Center in Franklin, Tennessee.

Making use of his Twitter account on Saturday, March 26, the 46-year-old crooner shared a black-and-white photo of Jeff. Along with the snap that saw the singer-turned-Franklin police officer smiling at the camera, he wrote, "So saddened to hear of the passing of my friend #Jeffcarson."

"He was a tremendous singer and one of the kindest people I've ever met. He also was a law enforcement officer who served his community bravely," Bryan added. "He'll be missed dearly. I'll see you on the good side buddy." 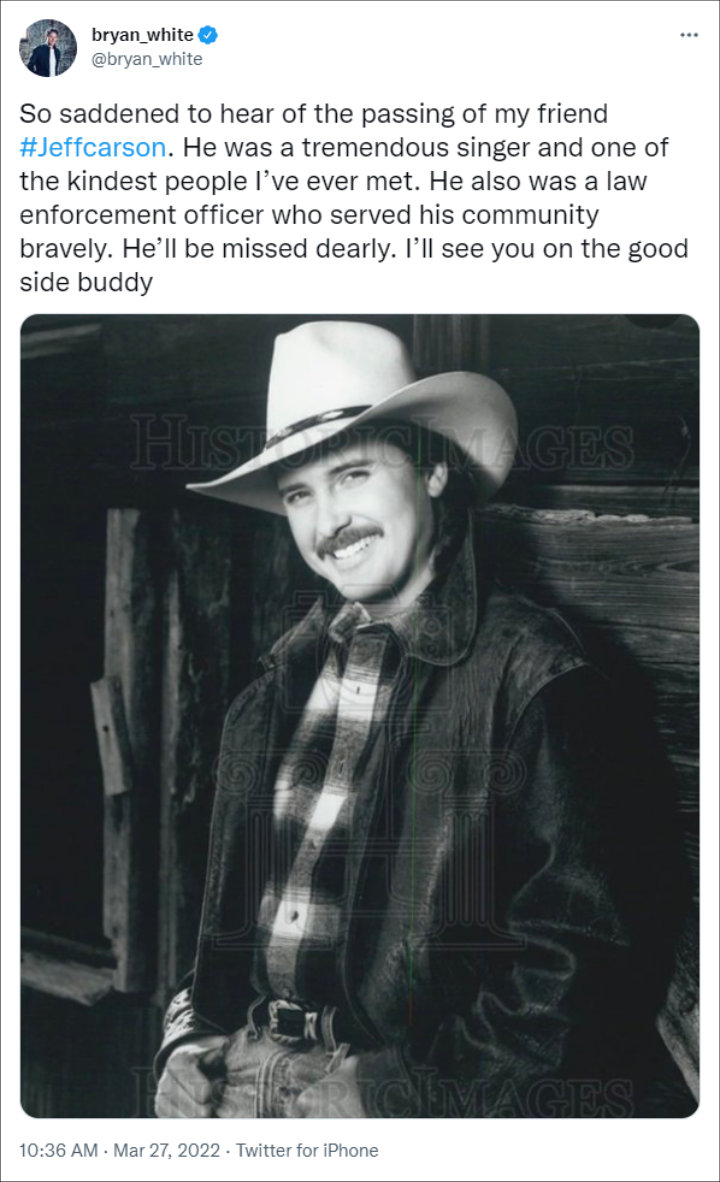 In the meantime, the Franklin Police Department thanked Jeff for his "life of service & song" and said the late singer "changed everyone he met, all of us, for the better!" The tweet continued to read, "It's hard to believe he's gone." In a separate post, the department penned, "Besides his chart-topping hits & amazing service to the #FranklinTN community, Officer #JeffCarson shared his talent to help us make our non-emergency number pretty unforgettable."

Jeff passed away after suffering a heart attack at Williamson Medical Center in Franklin, Tennessee on Saturday, per his publicist, Jeremy Westby. Jeff is survived by his wife Kim Cooper Carson, son Dayton Grei Herndon Carson and other family members.

Jeff was born in Tulsa, Oklahoma, in 1963. He started off his music career by singing in church and forming a band in Rogers, Arkansas, before moving to Branson, Missouri, where he wrote songs and played locally.

The late musician then received a recording contract at Curb Records in 1995 and released a single titled "Yeah Buddy". He then recorded the singles "Not On Your Love" and "The Car", which led him to take home his first Academy of Country Music award for video of the year.

Jeff went on to enjoy success with 14 songs on the Billboard chart but eventually made a big career change of retiring to become a police officer in Franklin. However, he returned to music in 2019 and released a previously recorded song, "God Save The World". He's due to release an album later this year that would feature duets with Michael Ray and Darryl Worley.